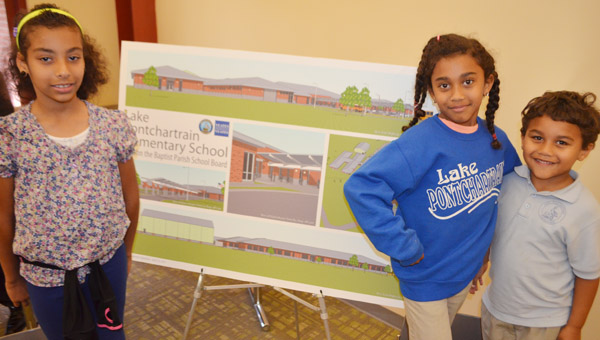 Lake Pontchartrain Elementary students Beza, 9; Gelila, 8, and Dagmawi Tilahun, 6, took in a public hearing Wednesday about the progress of their new school.

When St. John School Board member Ali Burl closed a recent public meeting concerning the progress of a rebuilt Lake Pontchartrain Elementary School, he said the next public gathering would be at the school’s ground breaking.

A parent in the audience joked for the school district not to worry about the pageantry; she simply wanted a new school.

All stakeholders involved have more than two years to wait for that, because School District plans call for a new Lake Pontchartrain Elementary to open in August 2017.

The school, which sits on U.S. 51, has been lifeless since Hurricane Isaac struck in 2012. The LPE community of 600 kindergarten through eighth grade students and staff members are located in a temporary site at the rear of East St. John Elementary.

Thankfully, progress is being made. Honest to goodness progress residents will actually be able to see.

The School Board unanimously voted in March to award the Lake Pontchartrain Elementary School demolition contract to ARC Abatement 1.

The process has begun, with an expected completion set for July. Demolition project leaders promise community members and surrounding neighborhood residents work will be kept to normal business hours, adding demolition activities would not take place at night or on weekends.

Considering how long some have waited on a new LPE, I bet more than few stakeholders would welcome night and weekend work if it sped up the process for a new school’s arrival.

Demolition project leaders also promise the site will be fenced off to ensure safety and no trucks would be driving through neighborhood streets.

The demolition, of course, is the appetizer to the main event — construction of a new Lake Pontchartrain Elementary.

Team members with Yeates and Yeates Architects in New Orleans are designing the project, which will go to public bid in October. The low bidder wins the contract, and construction is planned to begin in November.

Cindy Janecke of All South Consulting Engineers said school officials would like to construct a gymnasium as part of a new LPE, but cautioned it would have to fall within budget.

“(The School Board) has cost estimates (for a gymnasium,)” Janecke said. “Based on the estimates, everyone feels comfortable. You never know how the market might change; pricing may go up or down. It might be more expensive for contractors.

“Everyone is planning on it. It will be part of the bid package. Hopefully, a lot of people bid, and it’s competitive.”

Designers said the new school would service pre-kindergarten through eighth grade students and a Head Start. Younger and older students will have separate wings and a cafetorium is included that can be easily accessed by community members for public events that would keep residents from wandering the halls.

Z. Ames Yeates, a partner in the architectural firm, said the new school would be an “attractive” element for surrounding neighborhoods and an “anchor” feature for the U.S. 51 corridor.

The plans are promising, and it’s nice to have a timeline in place. However, after three years of waiting and with another two years more planned, it’s time to finally see a wrecking ball.