Down Through the Years coming to L’OBSERVATEUR :Community participation encouraged

L’OBSERVATEUR is preparing to publish Down Through the Years at the end of the month.  It is about our roots in the community where we look at the past. It will have old articles and pictures of the River Parishes “back in the day.”

The phrase “what is new is old” can be seen. In looking for content for this section, I found an article about meatless meals. During World War I, meatless, and wheatless days were introduced in 1917 to conserve rations for the troops. 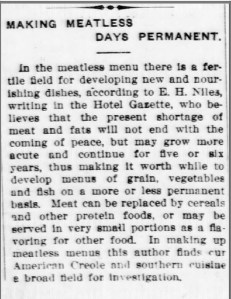 Space in the newspaper was a premium, unlike a digital article that may take several pages and repeat the same information multiple times, the space on the page is what was available. This is still the case today in print. L’OBSERVATEUR uses a mathematical formula to estimate how much space articles will take. Several recipes were printed using very little space. There is no information as to how many it will feed and it will be several years before nutrition information is readily available. The recipe for Baked Bananas with Sultan Sauce calls for boiling 1 and ½ cups of water for 30 minutes, and it is definitely a reflection of the time. I can only imagine burning my favorite pan.  In doing research for this, I had thought that Sultan Sauce was a reference to the Rudolph Valentino film “The Sheik,” which was all the rage, but the film did not come out until 1921. It is referring the sultana raisin that in present day is called golden raisins. The recipe also does not give instructions for baking the bananas. Baked bananas are a typical African dessert that is usually prepared by dipping sliced bananas in a combination of eggs and orange juice and rolling them in bread crumbs. 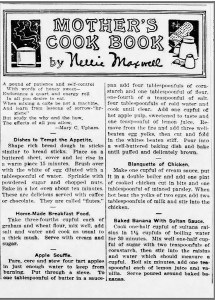 Pictures in the newspaper were not a prominent feature. Most of the pictures that appeared were drawings of important events or in advertisements. The first front page photos in L’OBSERVATEUR was January 24, 1920, featuring the Sheriff and Governor-Elect, respectively. The election had taken place the Tuesday prior and the article said, “We are more than pleased – we are happy – over the splendid results of last Tuesday’s election in the State.” “The liberty-loving citizens of Louisiana and St. John asserted their manhood and over-threw a political machine which was a menace to the welfare, the civilization and the best interest of the State.”

It can be noted that on a national level, women were given the right to vote that same year in August. The story was covered in L’OBSERVATEUR on page 5 in the August 28 edition. The front page did not have a big headline, but the first story was a declaration of candidacy by Conrad Buchler for District Attorney for the 28th Judicial District of St. John, St. Charles and Jefferson Parish. The previous week the top story in the paper was the death of Sheriff Hart who had passed away after long illness. The headline was “Death Claimed Noble Man.” 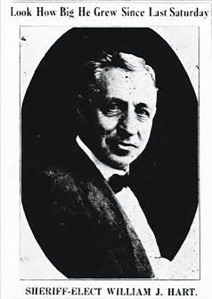 L’OBSERVATEUR has always published a hodge-podge of articles and community happenings. In June 1924, L’OBSERVATEUR, ran a story titled “Secret Wedding,” which was assured to have captured the attention of its readers – almost 100 years later it caught mine.  Mr. and Mrs. Albert Millet of Lions announced the marriage of their young daughter Honorine to Mr. Paul L. Daniels which was celebrated on March 9, 1924 at St. Peter’s Church and kept a secret. Mr. Daniels, who had been away since the wedding took place was joined by his lovely young bride in New Orleans on June 8. The happy couple left for an extended honeymoon trip throughout the United States and returned to the city in October. Mr. and Mrs. Daniel will make their permeant home in a cozy bungalow on Octavia Street.