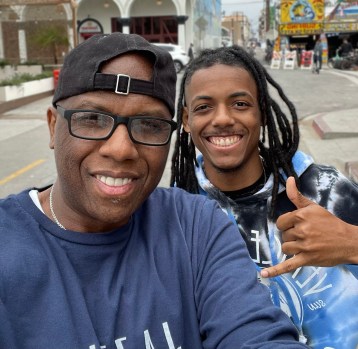 Quintin Gerard W. and LEMEK Yisrael, father and son, inspire each other to strive for greatness in their respective journeys through the music industry.

Musicians LEMEK, left, and Quintin Gerard W., are a father and son who reside in LaPlace and each have hits climbing the Billboard and Smooth Jazz Top 20 charts.

Pursuing their respective careers in music, father and son Quintin Gerard W. and LEMEK Yisrael serve as a reminder that with hard work, effort and time, success can come from anywhere.

“I talked to Allen Kepler, and he doesn’t recall that this has ever happened on his Smooth Jazz Network where a father and son reached the Top 20 at the same time,” Quintin said. “I’m very excited about that. I’ve been through a lot in this world and in this business. I look at my son and I see myself, and I can only imagine what I could have been if I had that kind of support when I was his age. The focus is not on me anymore; it’s on him, but I’m enjoying modest success as well, and I like that I can look back on the hard work I put in and reap the benefits of that.”

LEMEK credits his success in the industry to the example his father has set.

“It’s looking good for both of us, and I couldn’t have gotten here without my dad. He’s been absolutely instrumental in me making it this far,” LEMEK said. “He’s my biggest supporter, and this has been a great experience for me.”

For Quintin and LEMEK, music is more than a pastime. It’s the life that courses through their veins.

Growing up in St. Charles Parish, Quintin was always fascinated by records — the way they spun inside the player and the different record labels bearing the names Motown, Stacks and Warner Brothers. By the age of 8, he decided music was not only something he wanted to do, but something he wanted to win at by diving into the business side of the industry.

Quintin picked up a saxophone for the first time at Norco Elementary. At Destrehan High School, he became a member of the all-state band in 1984.

Music instructor Charles Catalano recalls that Quintin was the type of student who was always asking questions and wanting to do more.

“He’s one of those people who are persistent, non-stop. He’s going to make it happen no matter what,” he said.

Catalano was impressed when Quintin, only a couple of years out of high school, had the guts to move out to California to make a name for himself. He had secured a scholarship to Loyola University for music but grew weary from sitting in a classroom when he wanted to perform and make connections in the industry.

Quintin moved to Los Angeles in 1989 and hit the ground running. He found himself playing music at L.A.’s Nucleus Nuance in front of Arsenio Hall, Clint Eastwood and other big-name celebrities. He was in the midst of session work for companies like Sears, Estee Lauder and Levi’s Jeans when he reached a turning point in his career.

A chance decision to visit a jazz club one night brought him in contact with his saxophone idol, none other than Kenny Garrett. From that day, they hit it off, and Garrett guided him through the bumps and bruises of the music industry. Soon, Quintin found himself on the road with Jeff Lorber, playing alongside some of the best in the industry.

After the tour ended, Quintin found himself in a rut in his career and personal life. That was until he moved back to Los Angeles and met his wife, who became the mother of his child. It was time for Quintin to focus on his family life and put music on the backburner. He had started laying roots in Florida when LEMEK was born in 1999, but a call to take care of his ailing father drew him back to LaPlace, Louisiana only a few years later. After his father passed away in 2013, Quintin had newfound time to get re-acquainted with music on a deeper level.

Meanwhile, LEMEK was finding his own passion for music, fueled back backseat rides in the family car where he listened to contemporary jazz and R&B hits from Charlie Wilson, Michael Jackson and Stanley Jordan. A drum set was his first instrument, gifted to him by his father so that he would always have a skill that he could use to feed himself in the music industry.

Once their family moved to LaPlace and into a smaller home, the drum set went into the attic to save space, and he needed a new outlet for his musical journey. He fell in love with the acoustic guitar and later got into the electric guitar. LEMEK remembers listening to an audio-only version of Stanley Jordan’s cover of “Lady in My Life” and trying to figure out how he could reach that skill level.

After falling away from music for a few years in favor of friends and video games, LEMEK was drawn back in by a YouTube video of Peruvian guitarist Charlie Parra del Riego. Instead of just listening, he could watch and try to emulate the motions that created the melodic notes, and it lit a fire under him.

After years of being a bedroom guitarist, LEMEK gained courage and stage presence when he started playing live at jam nights around New Orleans. Three months later, he was invited to be part of a band that frequented the BMC Balcony Music Club on Decatur. It was around that time he started working on original tracks for his debut album, LEMEK, which should be released next year. In August, he teamed up with Trippin ‘N’ Rhythm records to take his career to new heights.

While LEMEK is at the sunrise of his musical career, Quintin sees himself at the sunset of his. At 56 years old, he’s less focused on performing and more drawn to his childhood dream of working in commercial music production.

“I’ve silenced the naysayers that have been there since I was 8 years old. At one point in my life, I was thinking maybe they were right. You have to find a way to suppress those thoughts and keep going,” Quintin said. “Look at us as an example that those dreams can become a reality. The bigger you dream, the better you become. If we can do it, anybody can.”