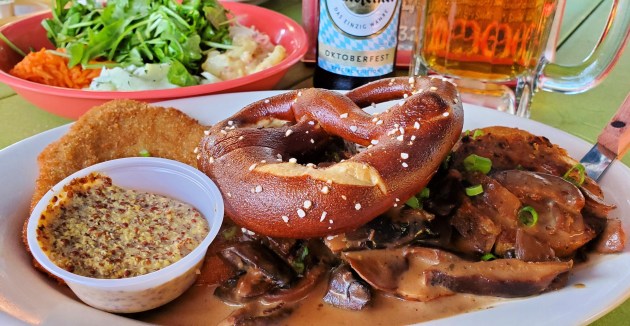 Breaded thin pork loin and dumpling with mushroom cream sauce, salad and pretzel is part of the Oktoberfest menu. 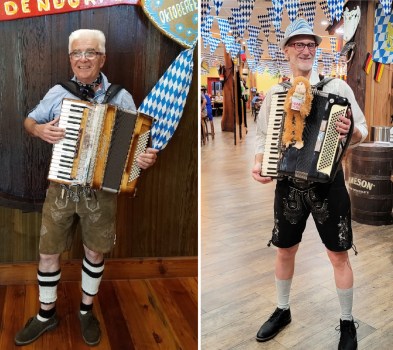 MANCHAC — Get out your lederhosen, spruce up your dirndls and prepare to eat and drink German style — It’s time for Oktoberfest at Middendorf’s!

The iconic Louisiana restaurant will host Oktoberfest every Wednesday and Thursday, Oktober 5, 2022 through November 10, 2022, at Middendorf’s Manchac and Middendorf’s Slidell.  This will be the 15th year of Oktoberfest at Middendorf’s featuring authentic German appetizers, entrees, desserts and beer.

The German expertise comes from Middendorf’s owner and European Master Chef Horst Pfeifer, who is a native of Germany. He grew-up in the hamlet of Bächlingen where his family still lives today. The village was established in 950 AD and boasts a grand population of around 150 people.

“It’s an honor to share my German heritage with everyone through the recipes that I grew up with,” said Middendorf’s owner and European Master Chef Horst Pfeifer. “I think Louis Middendorf would have been so happy to see Oktoberfest here at the restaurant. Louis was also from Germany, and he founded Middendorf’s back in 1934 with his wife, Josie. It’s funny because Middendorf’s is so widely known for seafood that a lot of people don’t realize that Middendorf is actually a German name.”

During Oktoberfest, there is a different German meal available each week for lunch and dinner,

10:30 a.m. to 9 p.m. (while supplies last). Guests who eat an Oktoberfest meal for all six weeks will receive an Oktoberfest Prize. Punch cards must be punched each week and turned in on the final week.

The full regular menu is also available for guests, so those who can’t possibly come to Middendorf’s without partaking of the “World Famous Thin Fried Catfish” can rest assured, the catfish and other beloved seafood dishes aren’t going anywhere.

Authentic German music is also in store for Oktoberfest. At Middendorf’s Manchac, Heinz Pfeifer (Horst’s brother) will make his triumphant return.  Heinz lives in Germany and travels here to entertain guests with his accordion and conversation. At Middendorf’s Slidell, the talented Al DiMarco will be back to play the accordion in the evenings, starting at 4:30 p.m.  This year, Al even wrote a special Oktoberfest song called “Everyone is German at Oktoberfest.”

Catch all the authentic German food, music and fun during Oktoberfest at Middendorf’s.  It’s every Wednesday and Thursday at Middendorf’s Manchac and Middendorf’s Slidell, Oktober 5, 2022 through November 10, 2022. Get more information at middendorfsrestaurant.com or call 985-771-7777.