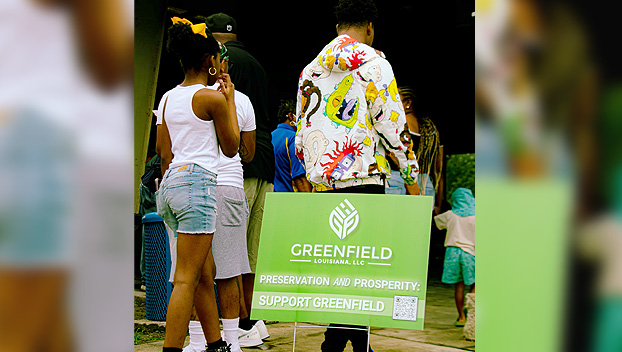 A Greenfield sign is seen as children enter a back-to-school giveaway recently held by the company at the Juan Anthony Joseph Memorial Park in Edgard.

WALLACE — An analysis by Greater New Orleans, Inc. has projected 371 jobs will be created and $8.4 million in annual tax revenue will be generated after the opening of Greenfield Louisiana’s grain terminal in Wallace.

The projections don’t account for tax reductions from a cooperative endeavor agreement between Greenfield, the Port of South Louisiana and the St. John Parish Sheriff’s Office. A “payment in lieu of taxes” (PILOT) deal established between the parties will result in approximately $209 million in tax reduction for the grain terminal over the course of 30 years.

Greenfield will send the parish a $4 million payment this year, followed by $2 million in annual payments beginning by 2025.

While the Pilot has implications for how ad valorem taxes will be distributed to parish government, schools and law enforcement, representatives of GNO, Inc. said tax revenue will be a net positive every year for the duration of the agreement, presenting a benefit to the parish.

Michael Hecht, president and CEO of GNO, Inc., said the Greenfield project has the potential to spur development on the West Bank of St. John, where residents have historically experienced less economic opportunity when compared to the East Bank. Job creation was highlighted as one of the major impacts.

Hecht said indirect jobs would be created as part of the supply chain related to the Greenfield operation. Examples include new employees of trucking, catering, security or cleaning companies serving the facility.

Meanwhile, induced jobs are linked to other businesses not directly involved in the manufacturing process that would see growth as a result of the Greenfield project.

“The easiest example is a local restaurant that now has to add employees because there are more people working at the facility eating breakfast and lunch,” Hecht said. “They are new jobs, created because Greenfield exists, but their businesses are not part of the supply chain.”

According to Harrison Crabtree of GNO, Inc., IMPLAN bases models on the concept that “all industries, households and government in the economy are connected by buy-sell relationships; therefore, a given economic activity supports a ripple of additional economic activity throughout the economy.”

However, Crabtree said the IMPLAN projections do not take the PILOT agreement into account. Over the 30-year span outlined in the PILOT, the facility is expected to bring in just over $253 million in local and state revenues as projected by IMPLAN. Subtracting $209 million for the PILOT would result in a net positive of $44 million in tax revenue, or just over $1.46 million annually.

Crabtree said this is likely a conservative estimate of tax revenue.

“IMPLAN’s tax impacts do not take into account specific tax rates and incentives and are not industry specific. Rather, figures are calculated based off of total tax receipts in Louisiana and divided amongst industries,” Crabtree said. “For example, in most cases a manufacturing facility would contribute more in property taxes compared to a bank, but in this scenario, they would be the same based on linear relations. With this in mind, our tax estimate is on the conservative side.”

The agreement has garnered criticism from entities like Together Louisiana, an organization that promotes tax fairness as well as workforce development.

In an August 3 letter addressed to Parish President Jaclyn Hotard and the St. John Parish Council, Together Louisiana analyst Erin Hansen stated that the fiscal consequences of the CEA are significant, depriving St. John Parish of funding for schools, government, law enforcement and more.

Joy Banner of non-profit group The Descendants Project feels that Greenfield and the Port have hidden behind “flimsy data and promises of jobs and economic development.”

“Our parish, taxing bodies and other officials have not taken the duty of care and are practically robbing our schools, our neighborhoods and our children of hundreds of millions of tax dollars and we are having to foot Greenfield’s bill,” Banner said. “GNO, Inc.’s study specifically states that it does not take into account tax incentives, but the issue in question is $200 million in tax incentives. Even they can’t stand by their own report and this project is clearly on the ropes.”

Responding to PILOT criticisms, Hecht said it is not a fair assessment to view the agreement as costing the parish more than $200 million in tax revenue.

“If that company or that project would not have happened if not for that tax break, the tax impact would be zero. If the project does happen, then it’s the gross tax impact, minus the tax break. It’s a net positive,” Hecht said. “The real question you want to ask when you see a Pilot is, ‘Was that tax break necessary to secure the project?’ If the net benefit is positive, you can say it’s a good deal.”

The agreement was approved by the Port of South Louisiana Commission during the April 6 meeting by a vote of 8-1. Minutes can be viewed here.

While the local taxing bodies were not formally presented an opportunity to negotiate terms of the CEA, Greenfield representative David Rollo told the Port of South Louisiana Commission that the company has convened with the St. John School Board and expressed a commitment to support local education, particularly on the West Bank. He clarified that the donations would go through a foundation with a direct line to West St. John, rather than the School Board’s foundation.

According to a spokesperson, Greenfield is building in-house training programs and is in the process of developing curriculum with River Parishes Community College to prepare locals for green jobs. Cal Williams, COO of Greenfield, said the company hopes to be a catalyst for revival on the West Bank.

“Every time we meet with neighbors on the West Bank, we hear about the need to get this area back on its feet. The new good-paying jobs we’ll be hiring for are a part of that, but this economic revival is also about the nearby restaurant or the local mechanic getting more business and hiring more workers, too,” Williams said.

Greenfield has received its minor source air permit from the EPA, as well as its LDNR and water permits. The company is still in the process of securing its permit from the U.S. Army Corps of Engineers.

Construction is expected to last approximately 27 months. If the company receives its Army Corps permit later this year, the facility would likely open in 2025.