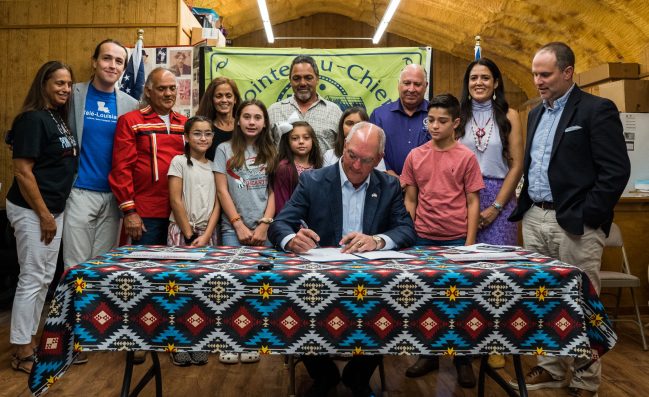 Pointe-au-Chien, LA – On June 24, 2022, Louisiana Governor John Bel Edwards participated in a ceremonial signing of HB 261 to create École Pointe-au-Chien, a culturally reflective French immersion school in the community.  The event was hosted by the Pointe-au-Chien Indian Tribe at its tribal building, one of the few structures to survive the direct hit of Hurricane Ida in August 2021.  Speakers included Governor Edwards, the bill’s author Speaker Pro Tempore Tanner Magee, and Pointe-au-Chien Tribal Chairman Chuckie Verdin.  The event began with an opening prayer by Father Roch Naquin and opening song by Chief Albert Naquin and Démé Naquin of the Jean Charles Choctaw Nation.  The Tribe recognized Speaker Pro Tempore Magee for his leadership and support for the bill and the community, and Senator Mike Fesi for his assistance in the effort.  The bill passed both chambers without any opposition.  The Tribe also recognized and thanked Governor Edwards for his support, noting that he was the first Governor to meet with our Tribal community.  The event was emceed by Patty Ferguson-Bohnee of the Pointe-au-Chien Indian Tribe and Will McGrew of Télé-Louisiane; the event ended with attendees joining in the Tribe’s song about its history.  The bill signing was followed by a shrimp boil prepared by Second Chairman Donald Dardar to celebrate passage of the bill.

The Pointe-au-Chien Indian Tribe has made it a priority to maintain the Indian French language.  Tribal members were denied educational opportunities until the late 1930s when Baptist missionaries set up a school in lower Pointe-au-Chien.  However, tribal members could not attend high school locally until the schools integrated in the late 1960s.  Once at school, Pointe-au-Chien students were punished for speaking their language and suffered from discrimination.  The Tribe led efforts in 2018 and 2020 to create a French immersion school in Terrebonne Parish, but the local school board failed to act on valid petitions requesting French immersion.  When the local school board closed the elementary school serving Bayou Pointe-au-Chien last year – the majority of the students were from Native American and French-speaking families – the Tribe focused its efforts on establishing a school that would be culturally reflective of the area, including incorporating the local dialects of Indian French and Cajun French in the curriculum.

The Tribe is thankful to its many partners and friends who worked together to support the effort.  Chairman Verdin said that the Tribe is “thankful for the support and honored that the State is investing in the future of our people by providing assistance to maintain our unique language, culture, and heritage.”

The Pointe-au-Chien Indian Tribe is located in Terrebonne and Lafourche Parishes.  Tribal members are the caretakers of an area continuously inhabited by their ancestors.  Despite increased environmental challenges, the Tribe is engaged in efforts to increase resiliency for future generations.  For more information visit www.pactribe.com.