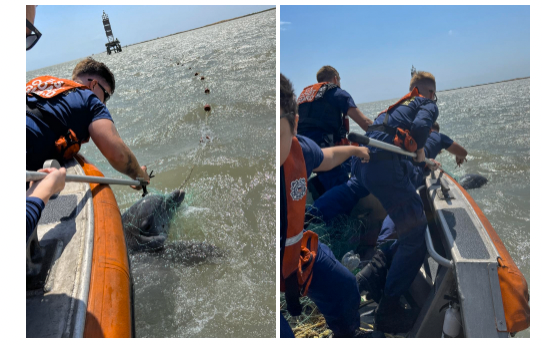 Once on scene, the crew cut the dolphin free from the net and released it back into its habitat. The illegal gillnet fishing gear had entangled 10 bonnethead sharks, one blacktip shark, 20 catfish, one redfish and a bottlenose dolphin.

“This incident clearly exemplifies the negative impacts of illegal fishing gear used in U.S. waters,” said Petty Officer 3rd Class Drew Ferguson, a Station South Padre Island boarding officer. “Not only does it impact marine life, but the entire ecosystem as a whole. Thankfully, we were able to free the dolphin and remove the gillnet before it trapped and killed any additional marine life.”

A gillnet is a form of fishing gear consisting of a wall of netting with mesh designed to trap fish’s heads and is illegal to use in Texas waters. Gillnet has been a major source of mortality for many marine animals due to their susceptibility to becoming entangled in the net.