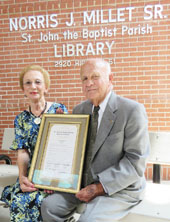 LAPLACE — Norris J. “Butch” Millet Sr. was always present, always steadfast in his commitment to his community and the children of St. John the Baptist Parish.

Millet passed away on January 21, 2022 at the age of 88. He leaves behind a large family and a legacy of service that included 53 years with the St. John the Baptist Parish Public Library System.

Upon retiring from the Library Board of Control in 2019, Millet recounted one of the highlights of his career – the day the Central Branch Library on U.S. 51 was named in his honor.

Millet’s two youngest grandchildren climbed onto a blue stepladder and pulled back a tarp to unveil his portrait in the lobby. He was one of the lucky few to have a building named in his honor while still alive, a feat that required approval from the state legislature.

Those who worked closely with Millet said he was worthy of every accolade.

Councilwoman Tammy Houston, a longtime member of the St. John Parish Library System, said Millet had been with the Library Board since its inception. He was a driving force in petitioning the state to open a public library in St. John Parish.

“He really believed in having a library in every community, in all of our towns. He was very instrumental in making that happen,” Houston said.

According to Houston, Millet’s desire to serve the community came from his heart.

“He devoted a lifetime to the library. For over 30 years, the people who served on the library board received no compensation. He did it out of his love of education and his desire to have a community that enjoys reading,” Houston said. “He was very, very honored when the library was named after him in LaPlace. When he retired, he still had a very strong presence in the library system. He did not miss any functions we had at the library. He was always there to promote the welfare of the library in the community.”

He was employed by the St. John the Baptist Parish School Board for 32 years and served in various positions.

Houston added that Millet never lost his sense of humor, and he would go out of his way to help anyone in need.

“He would jump up at the drop of a hat to go and help serve his community,” she said. “He was a strong presence in the education field and in the public library field, and he will be missed.”

Millet’s dedication to the community and especially to the youth was evident when he served as secretary and president for the LaPlace Lions Club, according to Lions Club member Stephen Flynn.

“Because of his background in education, he always knew how to talk to young people. That was kind of a gift,” Flynn said. “He was a good member. He never had anything bad to say, and he was never really critical of anything.”

Millet was already a member when Flynn joined the Lions Club 30 years ago. His longevity with the group was celebrated when he was named a lifetime member.

“We don’t just give life memberships away. You have to be nominated and voted on by the club. I think we only have about three life members right now, so it’s not something that we just give to people when they get older. He really earned it,” Flynn said.

Millet remained active in the group as long as his sons brought him to the meetings, according to Flynn. He supported Lions Club activities, including the annual Krewe du Monde balls, where he reigned as King du Monde X. He also served as a duke in the Krewe of Allovus Carnival Ball.

Another area where Millet’s service shined through was in his faith. A devout Catholic, he was a faithful member of St. Joan of Arc Catholic Church. He was a recipient of the prestigious Order of the St. Louis Medallion, awarded by the Archdiocese of New Orleans for exemplary service to the Catholic Church.

Millet additionally served as grand knight for the Knights of Columbus Council 5935, through which he was named a lifetime member.