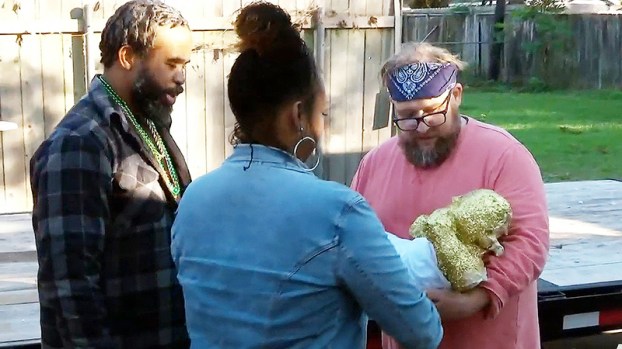 As seen on A&E’s Shipping Wars, LaPlace artist Eddie Rhinehart hands a giant king cake baby wrapped in a blanket to Dwight and Tyesha for transport to a Mardi Gras group in Mississippi. 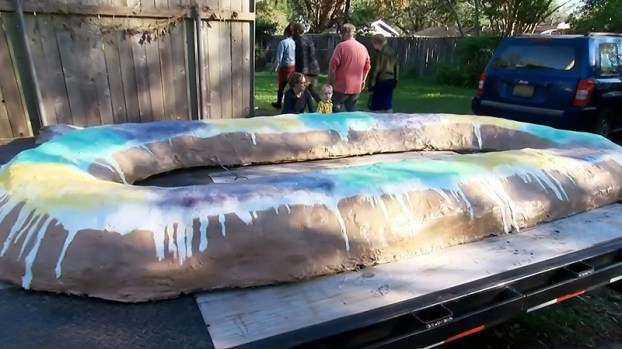 Season nine, episode nine, titled “Here’s the Throne, Here’s the Steeple,” can be found on the A&E app or through streaming services such as Amazon Prime with a subscription. The series follows the lives of heavy duty shippers who transport unusual items that traditional carriers wouldn’t touch, including Rhinehart’s king cake, which measures a whopping 6 feet wide by 12 feet long.

The recipe for Rhinehart’s king cake called for 25 yards of chicken wire, 20 gallons of plaster, 10 cardboard boxes, 10 sheets of Styrofoam and five sheets of sheetrock.

The sculpture was inspired by a painting Rhinehart worked on a few years ago. The king cake in the painting was stylized as a floating halo to symbolize the Christian background of the Mardi Gras holiday. Next came a miniature king cake sculpture, then a medium sized piece. When it came time to design the third king cake sculpture, Rhinehart’s oldest son told him, “Go big or go home.”

The gargantuan king cake, complete with a golden king cake baby bigger than a real-life newborn, was previously featured on WGNO’s News with a Twist.

“I’ve had the king cake posted for sale for a while. Shipping Wars contacted us a year ago to try to link us to some people who wanted the king cake. It finally came to fruition and it went to a Mardi Gras group in Mississippi,” Rhinehart said. “It was really exciting. They filmed about two months ago at my house. It was a fun, family event. They spoke really well about the area and represented us well. They were really professional and really positive people.”

The filming crew also took interest in how St. John the Baptist Parish and surrounding areas have been impacted by Hurricane Ida. While Ida’s impact was not reflected in the episode, Rhinehart said the crew members showed a great deal of compassion behind the scenes.

Rhinehart grew up in the Destrehan area and took advanced placement art classes in high school. However, taking a traditional college path caused him to drift away from his passion.

Rediscovering his love for art five years ago changed Rhinehart’s life for the better.

He started teaching art for home school groups and hosting art experiences at Air B&Bs for locals interested in drawing and painting. Three and a half years ago, he opened his 3xpArt gallery at the Esplanade Mall in Kenner and conversed with visitors from around the world.

Most of his work has remained stuck inside the Esplanade Mall since Hurricane Ida devastated the region, and he’s still anxiously waiting for a phone call giving him permission to retrieve the pieces he’s poured so much time and effort into.

As a resident of LaPlace for the past two years, Rhinehart is looking for space to open a new art gallery in St. John the Baptist Parish. He plans to continue providing art classes and working closely with special needs children.

The giant king cake transported by Dwight and Tyesha on Shipping Wars has since returned to LaPlace and is still available to interested buyers.

“Art’s really been a good way for me to cope and deal with things, and the king cake has always been a good representation of that,” Rhinehart said. “It has that hope, prosperity, a feeling of looking forward to holiday season. It’s a symbol of all of those positive things and something to look forward to after hurricane season.”

Rhinehart’s art gallery can be viewed online under the 3xpArt handle on various social media platforms.