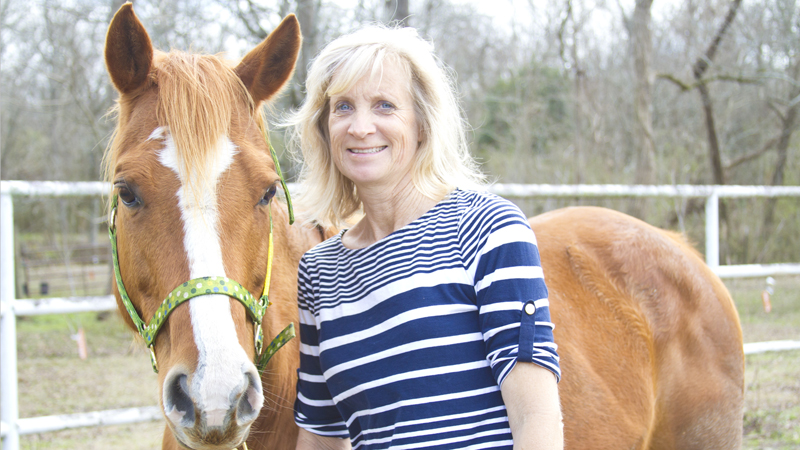 Anita Helfer, Executive Director of the Greater New Orleans Therapeutic Riding Center, takes a moment with one of the therapy horses.

LAPLACE — Hailed as one of the best kept secrets in LaPlace, the Greater New Orleans Therapeutic Riding Center has helped individuals with physical and mental disabilities build upper body strength, coordination and confidence for more than 24 years.

Classes resumed two weeks ago at 152 Shadowbrook Lane for the first time since Hurricane Ida. However, the storm damage is vast, and the road to recovery has been further hindered by lack of fundraising since the start of the pandemic.

Director Anita Hefler encouraged the community to support GNOTRC this Giving Tuesday, whether through monetary donations, volunteering time or simply telling others about the benefits of therapeutic riding.

“There is still a lot of work to be done, but we look semi-functional. The barn is damaged and the covered arena has damage, but we are structurally sound. All of the things that we need to keep the program going are intact,” Hefler said. “I see that as a sign from God that we can keep the program going because all the things that we need are here.”

All of the animals including horses, chickens, donkeys, goats and cows survived Hurricane Ida without a scrape, scratch or hair out of place. The grounds, however, were not as fortunate. Water did not come into the barn during Ida as it did with Hurricane Isaac in 2012, but it remained pooled on the grounds much longer. Fallen trees were scattered all across the grounds until the Methodist Church and another volunteer group came to the rescue with chainsaws and heavy equipment. Hefler is waiting on insurance to repair structures at the site, and phone and internet connections remain down roughly three months after the hurricane.

“We’ve been limping along a little bit because we are very short on volunteers. We usually have a lot of volunteers that come from LaPlace and Jefferson and Orleans parishes. Right now, people are busy dealing with their own houses,” Hefler said.

Horseback riding gently and rhythmically moves the rider’s body in a similar way to the human gait and can often help riders with physical disabilities improve in flexibility, balance, hip control and muscle strength. Riders are generally 4 years of age or older. Children under 4 must have a physical or occupational therapist assisting. The youngest GNOTRC rider was just under 1 year old, while the oldest so far has been 72.

Two exceptions are individuals with atlanto-axial instability or those who have rods in their back from surgery and would therefore be unable to ride.

According to Hefler, individuals with autism, attention deficit disorder or mental/emotional disabilities can gain increased confidence, patience and self-esteem by forming a close bond with the horse.

“Those who don’t need it specifically for the movement of the horse, such as kids with autism, can also benefit. When the brain is looking for movement and the horse provides the movement, the brain can rest and focus on something else,” Hefler said. “We usually take that time to work on speech or any other type of skills are indicated on their IEPs from school or things the parents would like them to be able to do.”

GNOTRC has had countless testimonials from parents and therapists. One parent shared that he saw an obvious change in his child after each session, and that horseback riding helps stress from the day or week float away.

“Collin went from being nonverbal just a few years ago. Now he’s doing really great things,” the parent said. “He’s learning Latin and reaching all kinds of benchmarks in his homeschool stuff, and this is a part of that… I think it’s been a really marked improvement, and it’s part of the equation. I want everybody who is struggling with things that we were struggling with to have that same opportunity as well.”

Volunteers are needed for a variety of tasks at GNOTRC, including but not limited to leading horses during lessons, walking alongside the horse, mowing grass, grooming horses, unloading hay bales, cleaning saddles, planning special events and more. Volunteers must be at least 13 years old, and training will be provided. More information is available at http://www.gnotrc.com/volunteers.html

November 30, Giving Tuesday, is the perfect time to make a monetary donation to the nonprofit at http://www.gnotrc.com/donations.html. According to Hefler, even a few dollars can feed a horse for a day, and donations go a long way to keeping the lesson fees for families as low as possible.