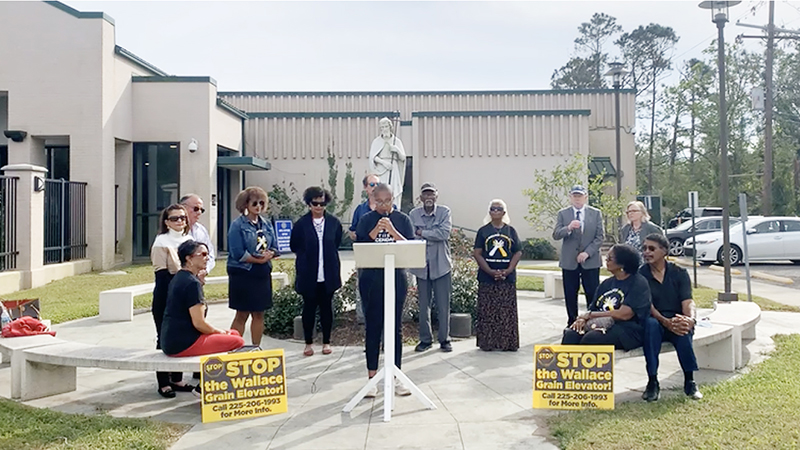 The Descendants Project was joined by the Center for Constitutional Rights and area activist groups November 9 during a press conference outside of the Edgard Courthouse, where a lawsuit has been filed against St. John the Baptist Parish over a controversial 1990 zoning ordinance.

WALLACE — A lawsuit filed this week by the Descendants Project and the Center for Constitutional Rights asks the District Court to declare a 1990 rezoning ordinance null and void and for St. John the Baptist Parish to remove it from all of its maps and records.

The 31-year-old Ordinance 90-27 rezoned a tract of farmland in Wallace from residential to industrial use. Representatives of the Descendants Project, a nonprofit advocating for descendants of people once enslaved in the River Parishes, say the residents of Wallace are now faced with the construction of a grain elevator in their quiet community as a direct result of an injustice that happened more than three decades ago.

On April 25, 1996, former Parish President Lester Millet Jr. was sentenced to 57 months in prison after being convicted of extortion, money laundering and violation of the Travel Act in connection to his efforts to assist Formosa Plastics Group in locating a rayon pump facility in Wallace. At the time, the Court of Appeals cited that these efforts included convincing nearby property owners, through illegal means, to convey their property to Formosa.

Plans for the facility eventually fell through, but not before the Wallace tract was rezoned for industrial use in April 1990, the same month Formosa completed the purchase of the land. The rezoning has remained on the books, and the land has since been used for farming sugarcane.

Earlier this year, Wallace residents became aware of plans for Greenfield Louisiana LLC to construct a grain elevator on the land zoned for industrial use. Several “Stop the Wallace Grain Elevator” demonstrations have been headed by Descendants Project founders Jo and Joy Banner, owners of local business Fee-Fo-Lay Café.

The Banner sisters are listed as plaintiffs on the lawsuit, which was filed on November 9 by the Center for Constitutional Rights on behalf of the Descendants Project. The targets of the lawsuit are the St. John Parish Council, the Parish Planning Commission and the Parish Department of Planning and Zoning. The named defendants are Parish President Jaclyn Hotard and Planning and Zoning Director Rene Pastorek.

A court date has been set for December 16, and Attorney Pam Spees of the Center for Constitutional Rights said a response from the defendants will likely be required within two weeks.

Spees stated, “The Descendants Project is reaching back into the past to right one of the wrongs that has been done to the community of Wallace and prevent the harm that lurks over them again. Their efforts to get the parish council to respond to their concerns have fallen on deaf ears. The only option left to them was to take them to court. The illegalities surrounding the adoption of this ordinance were so extreme and pervasive that they rendered it null and void.”

Representatives of the Descendants Project were joined by members of the Wallace community and environmental justice groups outside of the Edgard Courthouse this week.

Joy Banner stated, “It’s about knowing and following your own laws. We’re going to continue fighting until we get justice. Injustice and jobs don’t mix. Economic development and destruction do not mix. We’re going to stay the course because we love our community, we expect better, and we know that we can do better.”

The Banner sisters were around 11 years old in 1990, and they remember the air of anxiety and uncertainty that filled the community when faced with the possibility to having to sell property to make way for industry. They also remember how the community stood up in resistance, and that experience has shaped who they are today.

Jo Banner remembers her parents announcing they would be forced to give up the house that had been in their family for more than 100 years. Formosa abandoned plans for a Wallace facility in October 1992, but with Ordinance 90-27 still in place, she said the fight is not over.

“We come here to put a stop to a crime that was started years ago,” Jo Banner said. “We are here not just to win the battle this time. We are here to win the war.”

Sharing that sentiment was Wallace resident Stephenie Aubert, who said the proposed grain elevator project would be practically in her backyard.

“I’ve lived in that home from the birth of my second child who is 43 years old right now. I can’t imagine having to leave, but I can’t envision staying under those conditions, having a plant of that magnitude so close to my home,” Aubert said.

The lawsuit also takes aim at conflicting St. John Parish zoning maps that raise further questions about the status of the Wallace tract.

The first map referenced in the lawsuit is the 2012 signed, physical map in the Parish Government building, which shows the Wallace tract is zoned for heavy industrial use (I-3).

When it was discovered that the map signed by the former parish president could not be located, the Parish Council adopted this map as the “new official zoning map” through a resolution passed by the Parish Council on February 14, 2012. According to Spees, because council members noted this map had significant changes from the previous version, it should have been adopted by ordinance rather than by resolution.

The second map referenced in the lawsuit is the online Geographic Information Systems version, which shows the I-3 heavy industrial zone in Wallace to be surrounded by an I-1 light industrial zone.

A third map which was linked through the St. John Parish website and designated as an official zoning map showed the Wallace tract to be zoned as R-1/residential. According to the lawsuit, the hyperlink to this map was removed by October 19, 2021, after Planning and Zoning Director Rene Pastorek was notified of the inconsistency the day prior.

Also referenced in the lawsuit was a separate zoning map linked through the Parish website that, like the physical map in the Parish Government Building, designated the Wallace Tract as an I-3 heavy industrial zone.

An unsigned copy of the original 1986 zoning map produced by the Parish’s custodian of records on February 14, 2012 indicates that the Wallace Tract was originally designated R-1/residential before Ordinance 90-27 was adopted.

A copy of the lawsuit can be viewed at ccrjustice.org/home/what-we-do/our-cases/descendants-project-v-st-john-baptist-parish-1