A fireplace is a cozy and warm spot around which a family can gather. The home and real estate resource HomeGuides.com indicates that 60 percent of new homes have a fireplace, which is up from 36 percent in the 1970s.

Naturally, fueling a fireplace for the season may require homeowners with wood-burning units to keep an ample supply of wood at the ready. How that wood is stored is important, as properly stored firewood can prevent waste and other issues around the house.

Wood that is freshly cut has a water content of 60 percent or more. Yet, for best burning ability, wood should be near 20 percent in water content. Green wood is hard to ignite and will not burn nearly as well or efficiently as seasoned wood. Another concern associated with green wood is that it can contribute more to creosote accumulation in the flue of a fireplace. Creosote is a combustible material that may lead to fires if left unchecked.

According to BioAdvanced®, a science-based lawn, garden and home improvement innovator, seasoning wood typically takes six months to a year. Homeowners may opt to purchase seasoned wood that already has sat and dried.

Homeowners who have an abundance of firewood have to store it somewhere. Log Splitters Direct suggests choosing a dry, breezy area of the property that is about 20 feet from the nearest door to the house. This helps avoid hitchhiker pests from coming inside with the wood, such as termites, ants, spiders, and mice. Do not stack the wood flush against a structure. It should be at least a few inches away to allow airflow behind the stack.

Stick to organized rows of wood no more than four feet high. Log racks and pallets and posts will keep the wood up and off of the ground where moisture and rotting can develop. Placing the logs in an unorganized pile will impede air flow and cause the wood to rot rather than continue to dry and season even more.

Homeowners also should use a cover to protect seasoned firewood from the elements. Position a tarp or plastic sheeting so it blankets the top of the stack and extends a few inches down the sides. Keep the sides mostly exposed to air. Others prefer to stack it in a barn or shed or under an overhang.

Green wood is less expensive than seasoned wood. Those who prefer this method should do so in the early spring and let it season over the next several months.

Preparing Thanksgiving dinner for a houseful of close friends and relatives can be a tad overwhelming. Thanksgiving is a food- and tradition-centric holiday, and all eyes will are typically on the dinner table. Pulling off a feast of this magnitude – multiple courses, side dishes and desserts – takes considerable effort. These tips, tricks and timesavers can be a Thanksgiving host’s saving grace.

Don’t leave menu planning and shopping to the last minute. Decide what you’ll be cooking in addition to turkey several weeks before the big day. Select two or three side dishes, preferably items that can be prepared in advance and then reheated on Thanksgiving. These can include a baked macaroni-and-cheese casserole, mashed potatoes, roasted vegetables, and a cornbread stuffing.

Turkey is the centerpiece of the feast, so give it every opportunity to shine. No one wants a dry turkey, but unfortunately this lean poultry can dry out easily. Meats typically lose about 30 percent of their weight during cooking. However, by soaking the turkey in a brine prior to cooking it, you can reduce this moisture loss to as little as 15 percent, according to Dr. Estes Reynolds, a brining expert at the University of Georgia. Brining the fowl for a day or more can infuse flavor and moisture. Food Network personality Alton Brown has a fan-favorite roast turkey recipe with an aromatic brine that has garnered five stars and was featured on his show “Good Eats” (www.foodnetwork.com/recipes/alton-brown/good-eats-roast-turkey-recipe-1950271). A simple salted water soak also can work.

Take some stress out of Thanksgiving by cutting all vegetables and/or preparing some dishes a few days early. Label and organize prepared ingredients by recipe and store in the refrigerator. Make extra room in the fridge by removing nonessential items and placing them in a cooler with ice and cleaning out any old food or condiments. Plan your table settings and label which bowls and other serving dishes will be used for which items. This will make it much easier to set the table on Thanksgiving.

It can be challenging and expensive to have a full bar for guests. Mulled wine, hot cider and punches are ideal ways to service a crowd looking for delicious spirited drinks.

Use seasonal sights for your centerpieces or place settings. These can include small squashes, gourds, citrus fruits, nuts, or acorns. A hollowed-out pumpkin filled with fresh flowers also can be eye-catching.

Thanksgiving is a time to celebrate bounty. Treat guests to a great experience by learning some hosting tips to make the holiday easier to manage

They made it to the church on time
India can get pretty wet during monsoon season when five feet or more of rain can fall, says the Association of Mature American Citizens [AMAC]. So, if rain is considered good luck for newlyweds, it’s a good place to tie the knot. In fact, it was pretty lucky for Akash Kunjumon and his betrothed, Aishwarya. Their trip to the altar in the town of Thalavady was interrupted by a particularly heavy rainfall that caused flooding and, for a while there, it looked like they would have to postpone their ceremony for lack of suitable transport. They tried to find a proper boat to take them, but none was to be found. No problem.  Their neighbors didn’t let them down; they provided them with a cooking pot — a very big cooking pot — to “get them to the church on time,” as the song goes.
###
An ancient find
A Knight Templar lost his sword in the Mediterranean Sea off of what is now Haifa, Israel during the Crusades 900 years ago. It was retrieved recently by a hapless diver who came across came across a treasure trove of ancient artifacts, including the sword, by mere chance, according to the Association of Mature American Citizens [AMAC]. The Israel Antiquities Authority’s Robbery Prevention Unit says, “The sword, which has been preserved in perfect condition, is a beautiful and rare find and evidently belonged to a Crusader knight.”
###
No, it’s not a houseboat
Daniele Penney her boyfriend, Kirk Lovell, had found their dream house on the shore of the Bay of Islands inlet in Newfoundland. The good news was that it was available; the bad news was that it was about to be torn down, reports the Association of Mature American Citizens [AMAC]. It appeared to be impossible to haul the structure over land to their own property in the coastal town of McIvers. The road was had too many obstacles. So, they decided to float it to their parcel on a raft made of barrels and a metal frame loaded with old tires, using small boats for propulsion. It worked. They got the house to its new location, a bit wet but in one piece and now they are waiting for it to dry out. 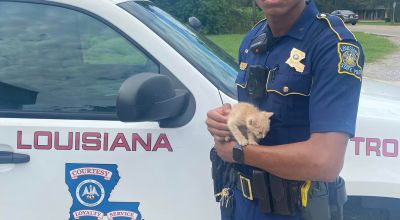 LSP rescues kitten from life on the streets