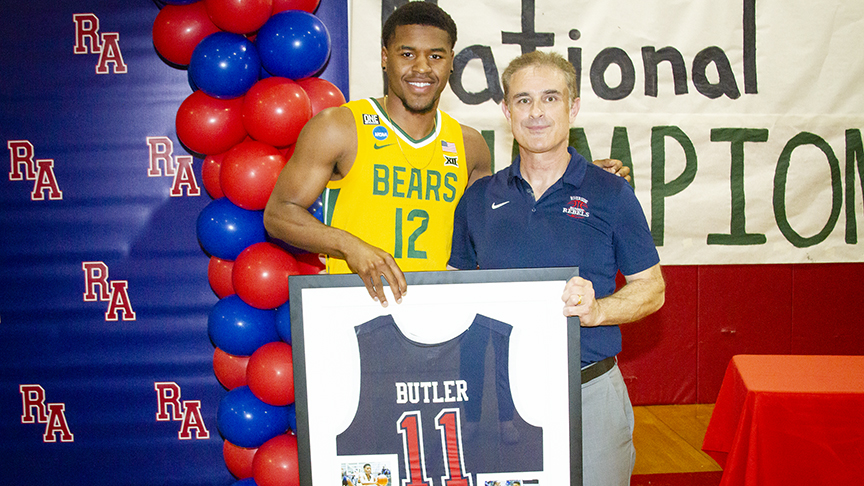 RESERVE — All eyes were on Jared Butler Thursday night, and basketball fans from all corners of the country were on the edge of their seats as they waited for his name to be called during the 2021 NBA Draft.

The Class of 2018 Riverside Academy graduate became a household name earlier this year when he led Baylor University to its very first national basketball championship. He was named Most Outstanding Player for the 2021 NCAA Tournament, and his No. 11 Riverside Academy jersey was retired among a crowd of students and parish dignitaries in May.

Butler was projected to be a first round pick in the NBA Draft. Most draft sites placed him between picks 22 and 30, and some expected his name to be called even earlier. SB Nation and CBS projected him to be the 13th or 19th pick, respectively.

So, it was a surprise when the 6-foot, 3-inch guard became the 40th pick of the NBA Draft by the New Orleans Pelicans.

Prior to the Draft, the Pelicans agreed to trade their No. 40 pick to the Memphis Grizzlies, who in turn traded their selection to the Utah Jazz. It was a gamble for the Jazz to trade down their No. 30 pick, but it paid off beautifully for head coach Justin Zanik, who told reporters that Butler has the versatility, physicality and demeanor needed to become an integral part of the team.

The reason Butler slid from round one projections into round two territory of the NBA Draft may be attributed to a heart condition flagged during the pre-draft process. Butler would not have been able to move forward in the NBA without being cleared by a panel of medical professionals.

On July 17, Butler tweeted, “I am fully healthy and cleared to play in the NBA! Out of an abundance of care, the NBA is incredibly thorough in vetting the health of every player during the pre-Draft process and throughout our careers. I am forever grateful that their comprehensive and strict health analysis has unanimously confirmed my fitness to play in the NBA. Now, my focus is entirely on the Draft and working daily to prepare myself to fulfill my lifelong dream!!”

Advancing to the NBA is a dream Butler has held for his entire life.

During Butler’s high school jersey retirement ceremony this past May, former Rebels basketball coach Timmy Byrd said there is a lot that the public doesn’t know about Jared Butler, such as the fact that he graduated from Riverside Academy in 2018 with 27 college credits already under his belt. That head start is allowing him to graduate from Baylor one year early this spring, just in time to prepare for the NBA Draft.

Byrd also shared that Butler teaches second grade Sunday School when he isn’t on the basketball court, and he was the only NCAA athlete in the country to earn a spot on the NCAA Oversight Committee. He thanked Butler’s parents, Richard and Juanea Butler, for sending their son to Riverside Academy when every Catholic school in New Orleans wanted him on their team.

Last fall, Butler was named the Associated Press’ Big 12 Player of the Year. His 2021 NBA Draft profile on nba.com describes him as a dynamic and deceptive ball handler capable of breaking down the best defenders.