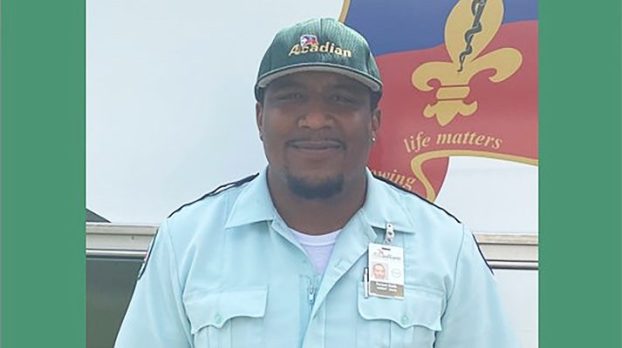 VACHERIE — In the past five years of working for Acadian Ambulance Service, Romell Steib has treated and transported individuals from every walk of life. He’s never known a stranger, and he can be found laughing and cutting up with co-workers he’s known for years as well as patients he’s known for minutes.

Prior to beginning his career with Acadian Ambulance on January 4, 2016, Steib served five years active duty in the United States Army, where he was stationed in NYC and Afghanistan. Steib returned home to Vacherie in 2015 and worked as a service technician for DIRECTV. He was on a service call at Acadian Ambulance Operations Supervisor Kevin Brennan’s house when he noticed a uniform hanging in the laundry room. Steib also had a friend that worked for Acadian Ambulance, and he asked Brennan what the process was to become a medic.

After a few ride along trips to see if the career was a good fit for him, Steib enrolled in the National EMS Academy EMT-Basic class and gained his EMT-B. Soon after, he starting working at Acadian.

Today, Steib is one of the Bayou Region’s field training officers responsible for teaching aspiring medics the tools of the trade. He helps students interested in EMS transition from classroom learning to caring for patients in the cab of an ambulance.

Steib enjoys visiting high school career fairs in the Bayou Region to help young people decide what they want to do after graduation. He has also served on several Surge teams during Hurricane Season by assisting in evacuations and treating and transporting people in hurricane impacted areas.

Steib enjoys spending his off time with his son. He can also be found giving back to the youth through charity work. Steib was part of a group of motorcycle riders that got together and hosted a small event in the Lockport area to raise approximately $10,000 for Children’s Hospital in New Orleans.

He’s a people person through and through, and that’s what makes Acadian Ambulance Services the perfect fit for him. Every day is an opportunity to help someone with a critical need.

(Editor’s Note: The following information will be printed in L’OBSERVATEUR’s graduation edition on May 26.) EDGARD — Academic signing day... read more