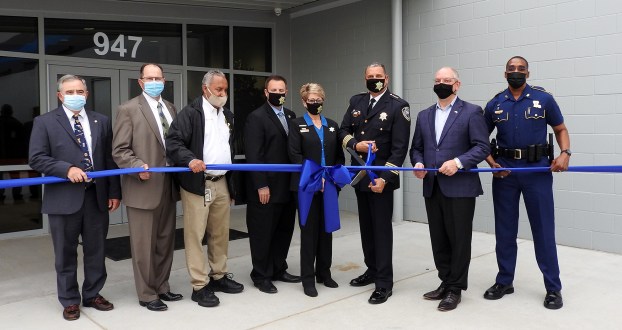 LAPLACE — It all started with a vision.

In 2016, St. John the Baptist Parish Sheriff Mike Tregre dreamed of a facility that could enhance safety, address officers’ training needs, offer community outreach and education, and stimulate the local economy. In 2017, the Sheriff’s Office acquired the old bowling alley on Cambridge Drive in LaPlace, demolished the building, and started bringing the vision to life.

A grand opening and ribbon cutting ceremony was held on April 30, 2021 for the new Lloyd B. Johnson Law Enforcement Training Center at 947 Cambridge Drive in LaPlace.

Governor John Bel Edwards was the key note speaker for the grand opening. Coming from a law enforcement family, Edwards has great respect for the sacrifices that officers make on a daily basis, and he was blown away by the resources now offered on the community level. He appreciates the fact that the new training center is a multi-use facility that can be utilized by multiple agencies, as well as the public.

“Unfortunately, in many ways, (law enforcement) is getting harder and not easier, but one of the great things about this training facility is that a lot of members from the civilian sectors are going to be able to come in here and get a better idea of the challenges facing law enforcement every day,” Edwards said. Sheriff Tregre said training is essential to effective law enforcement.

“There are so many Monday morning quarterbacks who will scrutinize decisions of law enforcement officers or what training they had or did not have that may have contributed to good or bad decisions made in split seconds or were made hours or days at a time … so let’s look at their training record,” Sheriff Tregre said. “We, as sheriffs and chiefs, have to train our officers better than ever before. Police officers have to follow the rules, and when we don’t follow the rules, the criminal will walk.”

The Lloyd B. Johnson Training Center takes training to a new level with a virtual reality simulation room, indoor shooting ranges with moving targets, classroom education areas, a fitness gym, a mock jail cell and a kitchen that will become a site for inmates to develop culinary skills with a certified instructor. A memorial for fallen law enforcement officers will be erected on the outside of the building.

The facility will also serve as a valuable community resource with courses open to the public for Rape Aggression Defense, hunter safety, CPR, Stop the Bleed and concealed weapons permits. Members of the public can also step into the shoes of an officer by participating in simulations reflecting real-life situations such as traffic stops, domestic violence calls and dealing with armed individuals.

Construction of the state-of-the-art building came at a cost of $10 million paid for by the St. John Sheriff’s Office revenue, with no additional cost to taxpayers. RTC and Denka Performance Elastomer have also partnered with the St. John Parish Sheriff’s Office for the enhancement and support of new technology and training equipment at the new Lloyd B. Johnson Law Enforcement Training Center.

RTC committed to platinum sponsorship, $20,000 over four years, to meet the training needs of community and law enforcement partners.

On behalf of RTC, community relations liaison Katie Klibert said, “At RTC, we’re proud to continue growing our partnership with the St. John the Baptist Parish Sheriff’s Office. The Lloyd B. Johnson Law Enforcement Training Center is a wonderful opportunity to have a centralized location for the continuing education and training of our parish’s law enforcement officers. As much a resource for our law enforcement partners as it is for our community, the center also creates a space where residents can receive training while putting names and faces to those who protect us.”

Denka Performance Elastomer also committed to the platinum sponsorship of $20,000 over four years.

Plant Manager Jorge Lavastida said, “DPE greatly appreciated the St. John the Baptist Parish Sheriff’s Office and all that they do for our parish. We are grateful for the opportunity to contribute these services to our community.”

The training center is named for former Sheriff Lloyd B. Johnson, who began his law enforcement career with the St. John Sheriff’s Office in July 1970 as a road deputy. He later held the positions of detective, chief of detectives and chief deputy, and he served as the chief investigator for the St. John Parish District Attorney’s Office from 1974-1976.

Johnson was first elected as sheriff in 1975 and served for more than 20 years, earning him the record as the third-longest term sheriff for St. John Parish. To this date, he is the only sheriff who has run unopposed in an election in the history of the Parish.