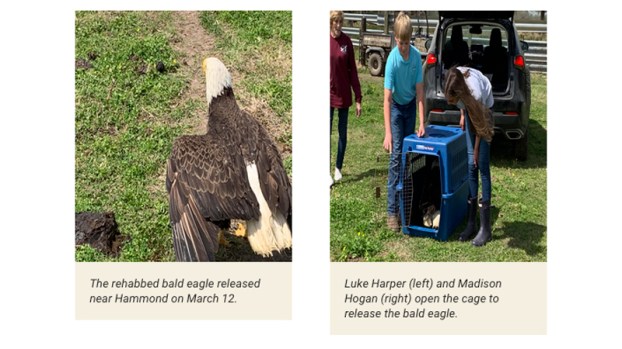 LDWF ties with Wings of Hope Leads to rehab, release of Bald Eagle

Todd Harper had no idea what his son Luke and niece Madison Hogan had brought back from the pasture of his cattle ranch near Hammond when they drove up in a utility terrain vehicle. Luke yelled they had an injured bird, perhaps a hawk.

But when Todd Harper went outside to check, he realized it was a bald eagle. Immediately, he contacted the Louisiana Department of Wildlife and Fisheries (LDWF) enforcement division. And so started the process of nursing the injured eagle back to health and led to its released March 12 near where it had been discovered.

The eagle, recovered by Luke, 10, and Madison, 12, was discovered on the afternoon of Sunday, Jan. 17. Luke and Madison noticed it tried flying but immediately fell to the ground. They said they retrieved it and made their way back to the house.

LDWF enforcement agent Cpl. Brody Roberts, from Kentwood, was dispatched to Harper’s house. The eagle was emaciated and barely able to move. Roberts secured the eagle then took to Leslie Lattimore, who runs the Wings of Hope Wildlife Sanctuary in Livingston, about a 45-minute drive from Harper’s house.

“It was just so weak it didn’t even put up a fight,’’ Roberts said. “I drove 45 minutes with it in the truck and it didn’t flap or jump or anything. With a bald eagle we’re, of course, going to take action and take care of it. It was good to follow the whole rehab process. I would check in with Miss Leslie to see how it was doing. And she told me it was doing great. Good to see to it released.’’

Lattimore, who has successfully rehabbed countless birds and other wildlife at the sanctuary, was able to bring the animal back to health. She said the eagle had likely been injured several weeks prior to her discovery, leading to her being emaciated.

“It was a soft tissue injury in the right wing,’’ Lattimore said. “There were no breaks, just a severe soft tissue injury until she became emaciated. When they get that way they just can’t fly. It took us a while before we got her up to speed and put her in the flight cage. Then she was bouncing around, regained her strength until we were ready to let her be released.’’

The release was a day of celebration for the Harper family and friends as well as Lattimore and LDWF. The cage housing the eagle was taken to a pasture on Harper’s farm. Luke and Madison assisted Lattimore with opening the cage to let the eagle go. Roberts, too, was on hand.

After leaving the cage, the eagle bounded about before taking off. It circled the area, landed in a field about 200 yards away then flew and roosted in a tree.

“This is certainly a success story and a great example of how our partnerships with rehabbers throughout the state benefit birds and wildlife in Louisiana,’’ said Biologist Manager Melissa Collins, who oversees LDWF’s rehabilitation program. “The rehabbers are the experts and that’s why we work with them in cases like this.”

“And,” Collins added, “it’s important to point out that the best thing to do when it comes to situations like this is to assess from a distance and get in touch with LDWF or one of our licensed rehabbers for advice and instruction prior to intervening.’’

The bald eagle has made an impressive comeback nationally and in Louisiana since the early 1970s when pesticides, specifically DDT, decimated the population. In the early 1970s, there were only five to seven active bald eagle nests in Louisiana. An LDWF survey in 2017-18 revealed there are well over 350 active nests in the state and that is a conservative estimate.

Though no longer endangered, bald eagles remain protected by the Bald and Golden Eagle Protection Act, a federal statue used to make sure those species continue to thrive.

For more information on Wings of Hope Wildlife Sanctuary, go to http://wingsofhoperehab.org/.

For more information on injured or orphaned wildlife, go tohttps://www.wlf.louisiana.gov/page/injured-orphaned-wildlife. And to report injured bald or golden eagles, contact your local LDWF office or call 1-800-442-2511.

For video, interviews and photos from the release, go tohttps://ldwf.canto.com/v/2021BaldEagleRelease/allfiles?viewIndex=0.