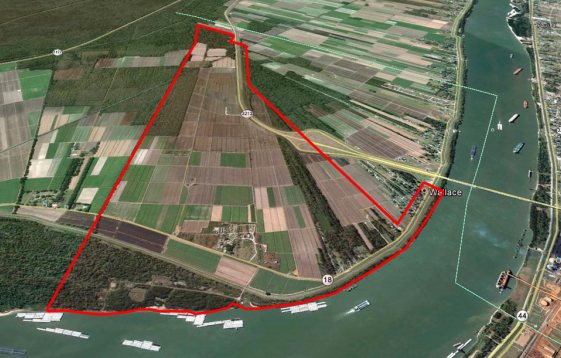 WALLACE — A proposal by Greenfield Louisiana LLC to construct a grain terminal on the West Bank of St. John the Baptist Parish has drawn the ire of some community members who are concerned about adverse health and environmental impacts.

Greenfield filed permit applications to build a 248-acre terminal that is expected to create 300-plus jobs during peak construction and at least 70 full-time jobs with an average annual salary of $100,000 plus benefits once operational.

If constructed, the grain terminal would facilitate the movement of agricultural products such as corn, wheat and soybeans to end users throughout the world. This would make the region more competitive in export trade globally.

Greenfield Louisiana LLC applied for an air quality permit in May 2020, and the Louisiana Department of Environmental Quality issued the permit two months later.

Also in May 2020, the Port of South Louisiana applied for a $25 million Better Utilizing Investments to Leverage Development (BUILD) Transportation Discretionary Grant to build a dock for the proposed Greenfield Louisiana terminal. If approved by the Department of Transportation, the Port would lease the dock to Greenfield to facilitate export operations.

Jo Banner, co-owner of Fee-Fo-Lay Café in Wallace, is part of a nonprofit group called The Descendant’s Project. The group aims to advocate for better quality of life for the community, and Banner feels the Greenfield Louisiana Project would be detrimental to West Bank families.

She expressed concerns over excessive dust in homes, patios and pools, as well as foul odors, excessive noise and health risks that could result from a 300-foot tall grain elevator.

“Our community is already bearing an overwhelming pollution burden. In the five-mile radius surrounding the proposed grain terminal, our community already carries some of the highest cancer risk in the state and in the country,” Banner said, referring to data from the National Air Toxics Assessment released by the Environmental Protection Agency in 2015.

“Being within the 95th national percentile for the NATA Respiratory Index means only 5 % of the U.S. population has higher exposure to respiratory hazards,” Banner said. “Researchers at Tulane University have found that the tiny particles from grain dust can get stuck in lungs and cause serious respiratory issues and fibrosis. Studies show certain levels of exposure to grain dust can cause wheezing, chest tightness, coughing and symptoms of chronic respiratory disease. It can also irritate our eyes, nose and throat and exasperate conditions like asthma.”
Banner added that the Centers for Disease Control and Prevention assert that grain dust can include mold, pesticides and bacteria.

According to the Port of South Louisiana, the Greenfield Project will allow for increased movement of agriculture products via water and rail, which keeps trucks off the road and reduces emissions and congestion. According to the Port’s grant application, at the site itself, an environmental assessment completed on the property found the project would have minimal impacts on air and water quality.
The grant application states, “Greenfield Louisiana is expected to reduce grain dust emissions by 80 percent from average existing grain elevator emissions…Greenfield Louisiana will be engineered and constructed to meet EPA’s 2014 proposed, updated New Source Performance Standards, which include more stringent design and performance requirements, such as: 1) enclosure and aspiration to dust control for each barge and ship unloading leg; 2) increased monitoring, annual opacity testing and increased frequency for stack testing; and 3) opacity and emission standards that apply during periods of startup, shutdown and malfunctions.”

During a community meeting conducted via Zoom on March 10, Banner also shared concerns over cultural impacts in the River Region. She pointed out that the West Bank of St. John Parish has historic landmarks not replicated anywhere else in the world, including the Whitney and Evergreen Plantations and the Greater Woodville Baptist Church, which was founded by a formerly enslaved Union soldier. Even the sugarcane fields lining the sides of the river have canals and other features that tie into the history of the enslaved.

“The location has a high probability of ancestral ground slave cemeteries located on the grain site,” Banner said, noting that research on the area is being undertaken by a national forensic archaeology firm. “Historic artifacts would be lost.”

Banner envisions an the economic future for the region based on culture, tourism and history, rather than expanding industry.

“Relocation to rural areas has been on the rise and has increased due to the pandemic, especially in the millennial age group. Opportunities for more museums, tourism and heritage related jobs and businesses also come with that age group,” she said.

Jordan Brewington, a friend of the community who will be joining the ACLU of Louisiana as a racial, equity and reparative justice fellow, encouraged community members on the Zoom call to make their voices heard.

“Before the Army Corps of Engineers approves the permit, they have to evaluate the probable impacts to the public. These impacts include conservation, economic impacts, aesthetics, environmental concerns, impact on historic properties and the needs and welfare of the people,” Brewington said. “To evaluate these impacts, the Army Corps is soliciting public comments. These comments will be important in determining whether to accept or deny the permit.”

All public comments must be submitted by March 31. According to Brewington, a letter-writing workshop will be held via Zoom at 7 p.m. March 18. Letters may also be dropped off at Fee-Fo-Lay Café.