L’OBSERVATEUR 19th Amendment coverage in 1920: 70 years of struggle at last crowned with victory 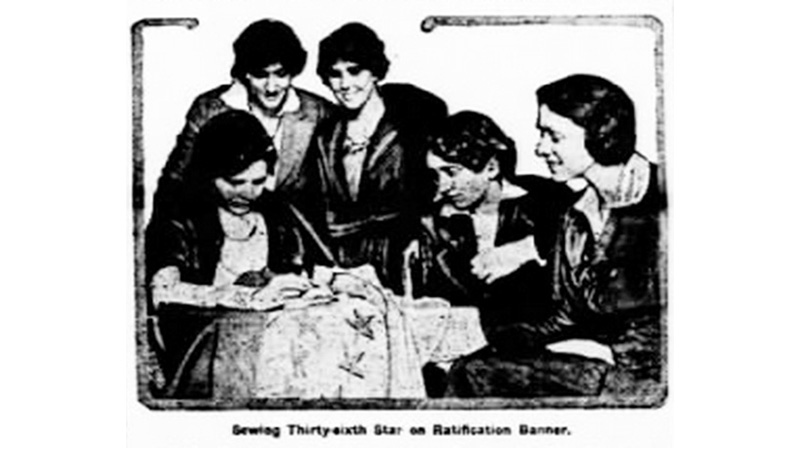 These women are celebrating the ratification of the 19th Amendment by sewing the 36th star on their Suffrage Banner. Each star represents another state that voted in favor of passage.

LAPLACE— On August 28, 1920, the front page story on page one of L’OBSERVATEUR was the death of local sheriff, William J. Hart. Hart passed away on August 19 while still in office. The news story said that he was very popular.

On page five, still a right hand read, was an article about the 19th amendment being ratified. The article’s subheading included “70 years of struggle at last crowned with victory.” With the states of Washington and Tennessee ratifying the amendment, 3/4 of the states had this provision and prompted passage at a federal level.

In 1920, it had been 70 years since the organized movement for woman suffrage began in the United States. Although support had been sporadically advocated in print platforms, it was not until 1848 that Lucretia Mott and Elizabeth Cady Stanton called for a woman suffrage convention. They created the “Declaration of Sentiments”, a document modeled after the Declaration of Independence, and passed a resolution demanding equal suffrage.

Although not covered in the article, The Declaration of Sentiments included several examples of oppression experienced at the time, such as the inability to own land or earning wages, the inability to vote, and submission to laws created without representation. Women had no authority in divorce or child custody. They were held to a different moral code, and laws were tailored to make them dependent and submissive.

In 1875 Susan B. Anthony drafted the amendment to the Constitution and in 1878 it was introduced in the senate by Aaron A. Sargent (R-CA). Various committees were formed to study and debate the document. It reached the Senate floor in 1886 and was defeated.

In 1890 the National American Woman Suffrage Association was formed, and the approach taken was on an individual state level.

The debates in Congress would continue as late as 1914. In 1912 The NAWSA created a headquarters in Washington beginning an active campaign for the passage of the amendment.

It is interesting to note, the people we most associate with this movement were deceased years prior to the amendment passing.