Editor’s Note: Individual stories are being written for each of the St. John Parish President candidates. Jaclyn Hotard, Rodney Nicholas and Randy Vincent will be featured in upcoming editions. Terry Lewis Sr. was featured in the Sept. 14 edition.

RESERVE — Four years ago, Charles Julien of Reserve ran for St. John the Baptist Parish President and came up short, finishing in third place behind Daniel Becnel and Natalie Robottom.

In the event that none of the candidates receive 50 percent of the vote, a runoff election between the top two vote getters will be held Nov. 16.

Running on a platform of putting the residents of St. John first, Julien would prioritize a more effective recreation department, a seat at the table for the West Shore Levee Project and measures to ensure industries along the river hire local.

Julien previously represented District 3 for four years on the St. John Parish Council, where he voted for an implemented $29 million in bond and infrastructure projects. During his Parish Council tenure, Julien also created the Department of Health and Human Resources and oversaw annual budgets.

One of his goals if elected Parish President is to create a new department for drainage for the full-time maintenance of ditches and culverts. Addressing flood-impacted areas in St. John Parish would also involve collaborating with the U.S. Army Corps of Engineers in the levee planning and construction process, according to Julien.

“There are areas of the parish that are flooding when we get two inches of rain,” Julien said. “We need to make sure that when the levee is built, we have engineers at the table that will know the infrastructure and be able to advise the Corps on what we need so that our drainage could be better.”

Bringing St. John companies into the levee construction will make sure residents benefit from the $760 million investment, Julien said.

“I’m passionate about running for Parish President because I love my community,” Julien said. “My ancestors were from here. My children were raised here.”

Julien said more attention should be given to economics, ensuring that the small businesses of St. John are taken care of. Likewise, he believes in fairly compensating St. John Parish employees by making sure their salaries have been adjusted with inflation.

“When I’m elected parish president, I will be accessible,” Julien said. “I will be on the job and around the job to ensure everything is going the way it’s supposed to go. We want everyone to do their job, but we have to compensate them and be fair with them as well.”

Another priority is to make sure local industries are being good neighbors in terms of hiring and training local people, according to Julien. He also advocates for holding chemical plant emissions to Environmental Protection Agency and Louisiana Department of Environmental Quality standards to improve quality of life for residents.

Vitally important to Julien is the state of recreation and the St. John Parish public school system.

“Children are our future, and that’s where we need to invest,” Julien said.

An idle mind is the devil’s workshop, according to Julien, who advocates for after school recreational programs and job skills training for youth.

“If we don’t create a situation where our children are being trained and educated, then we as a community will continue to see children getting in trouble and creating problems,” Julien said. “Our school system is also a huge part of the picture. When people want to relocate, the first thing they do is look at the school system.”

Julien recognizes there are people working hard to get the job done. He’s a longtime coach and educator at East St. John High School who has dedicated more than 25 years to children.

A graduate of Southern University A & M of Baton Rouge, Julien received his degree in English. He believes a partnership between St. John administration and the school could help attract and maintain more certified teachers, even if it means hiring from within.

While his background in education is important, Julien said it is his life experience that makes him relatable. From making mistakes in his younger days, he’s become a well-rounded individual who can have heart-to-hearts with the experienced doctors and children still finding their path in life.

Julien also pledges to make sure voices on the West Bank are heard and that there will be no more broken promises.

“When I give my word, I will stand by my word. No matter East Bank or West Bank, we will be one St. John Parish,” Julien said. 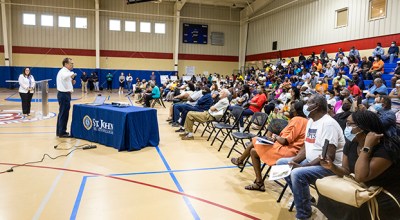 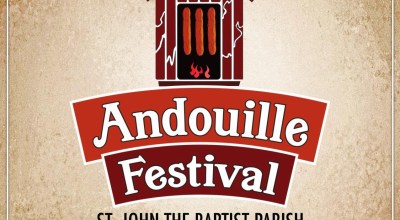 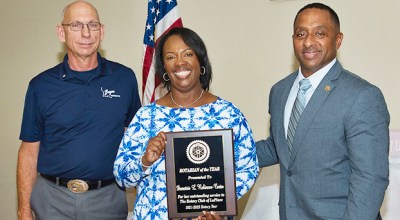