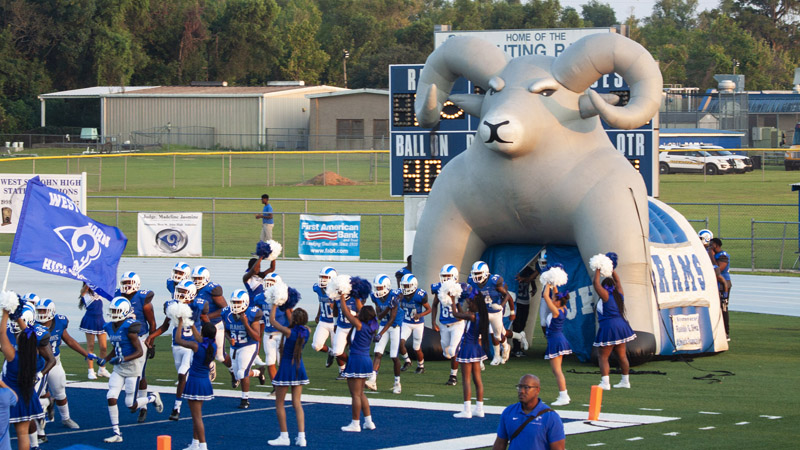 The West St. John Rams run out onto the field for the Sept. 6 Week One opener against St. James.

EDGARD – Each year, at the beginning of the football season, teams and fans alike will circle certain dates on their calendars in anticipation of a big game. West St. John and St. James High School never have to wait very long for their circled date because they meet at the beginning of each year. In last year’s “Railroad Classic”, St. James throttled the Rams 43-0 in a lopsided victory. This year marked the 24th meeting in the series that has been dominated by St. James the last few years.

The opportunistic St. James defense got on the scoreboard first as they scooped up a WSJ quarterback fumble and ran it in for a touchdown in the 1st quarter for a 7-0 lead.

The Rams’ only scoring opportunity in the first half came in the second quarter with a long drive when the offense mixed it up with runs by QB D’andre Gaudia and RB D’kyri Jackson. The drive ended with another fumble that was recovered by St James on the Wildcat 23- yard line.

Late in the first half, St. James benefited from a poor punt from the WSJ end zone to take over on the Rams 14-yard line. St. James scored again right before halftime on a 4-yard run by Senior RB Sean Lebeouf to make the score 28-0.

The St. James Wildcats came into the game as the #2 ranked team in Class 3-A and did nothing in the game to tarnish their reputation.

West St. John will travel to play Riverdale High School next Saturday at 2:00.

West St. John’s defense gets to work against St. James

RESERVE – When East St. John defeated the West Jefferson Buccaneers 41-6 in Week Two of the 2018 season, Coach Brandon Brown celebrated his first win as Wildcats head coach and saw the beginnings of what could grow to become a powerhouse team.

History repeated itself one week early, as the E emerged victorious 47-7 over the Buccaneers in the season opener Friday night under the Joe Keller Stadium lights in Reserve.

East St. John jumped out to an early lead, advancing to a 28-0 lead by halftime. That lead increased to 41-0 in the third quarter, before the Buccaneers posted their sole touchdown of the night.

“Anytime you end up with a 47-7 victory, you have to be excited, but we have a lot to clean up so we can play a better game next week,” Brown said. “It’s Week One, so it is expected.”

Brown would like to see the team improve tackles and limit procedural errors. However, he was pleased with the E’s effort Friday night.

“We showed a great balance offensivelyanddefensively,rantheballwell and threw the ball well,” Brown said.

Senior running back CJ Gardner shined offensively, according to Brown.

The win was especially sweet coming off of a 47-6 jamboree win over West St. John last week.

The Buccaneers, known for fielding a powerful group of receivers, were led by first-year coach Bryan Crayton.

The Comets easily handled their Class 5A opponent in the season opener for both teams, rolling up 252 yards of offense while holding the Tarpons to a total of 43 yards.

PhilipTran,KeenanGauffandJustin Dumas all rushed for touchdowns. Dumas was 10 of 14 for 120 yards passing. Carter Chauvin added a 25-yard field goal and Kamren Campell had a 48-yard interception return.

The Rebels lost a nail-biter that saw five lead-changes before the fourth quarter. Riverside led 25-14 at the half.