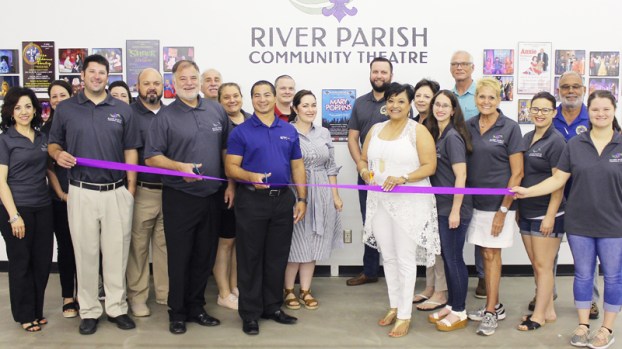 RESERVE — With no storage space available, the River Parish Community Theatre Board was forced to relinquish large panels, painted flats, bedroom and office furniture and other reusuable set pieces after annual summer shows.

That changes this year.

Hours of cleaning, painting and replacing old flooring has given new life to the former Reserve Telecommunications headquarters, which will now serve as a multipurpose facility for the local theater group.

RPCT volunteers work to spruce up the old RTC headquarters.

Board members, show sponsors, elected officials and area families who attended the unveiling were pleased to see the revitalization of a building that has remained unoccupied for more than a decade.

RPCT Board President Sean Roussel grew up near the building, and he saw it as the perfect route to expand the growing theater group.

“We started looking at all the set pieces we were forced to throw away every summer because we didn’t know where to keep it,” Roussel said. “This came to mind.”

“There’s been a whole lot of cooperation, and RTC has been very generous to us in giving us a lot of latitude,” Roussel said. “People were really happy to see that building get new life. A lot of people grew up in that building. Their families worked there. You have generations of people who have worked for RTC, and for them to come back into the building and see what we are doing with it is really nice.”

The new (old) building has been dressed up with photos of shows from the past five years. There are rooms dedicated to costumes and props, along with a large room for audition meetings.

Roussel plans to use the space to host children’s theater workshops, small rehearsals and other functions.

“It’s really going to be multi-purpose for us and something we didn’t have before,” Roussel said.

The new multipurpose building is located at 203 W. Fourth St. in Reserve.

Meetings and auditions have previously been held in the Riverside Academy band hall when the stage at St. Peter School was unavailable due to Holy Week or school events.

St. Peter School is a fantastic partner, Roussel said, adding RPCT looks forward to a long and continued relationship with the school while also utilizing the RTC building.

Additional restoration of the building’s exterior is also in the works.

“This partnership was another step in ensuring the viability of this theater company by providing meeting, storage and construction space,” Klibert said. “We couldn’t be more thrilled to see the work they’ve already put into our former home, and we look forward to what else they have in mind.”

“We have taken classic shows and have really done them in a tremendous way using new styles of acting, dancing and doing things,” Roussel said. “Even though it is an older show and a classic with many, many recognizable songs, it’s going to be like seeing it for the first time. I really believe that.”

Following the the first completely sold out show in a long and rich history of local summer musicals, RPCT has added an extra performance to this year’s schedule.
A total of eight performances will enchant audiences between July 12-14 and July 17-20.

“We’re going to do two shows in one day, which has never been done in this area,” Roussel said.

To accommodate the demand for tickets, the group has added 24 seats to the permanent seating chart, eliminating the possibility of standing room only tickets.

General admission tickets go on sale June 24 for $20. Tickets can be purchased online at riverparishtheatre.org or at Roussel’s Fine Jewelry and Gifts in LaPlace and Gramercy.

RPCT Friends of the Theatre members have the opportunity to purchase tickets ahead of the public based on their membership level guidelines, beginning June 22.