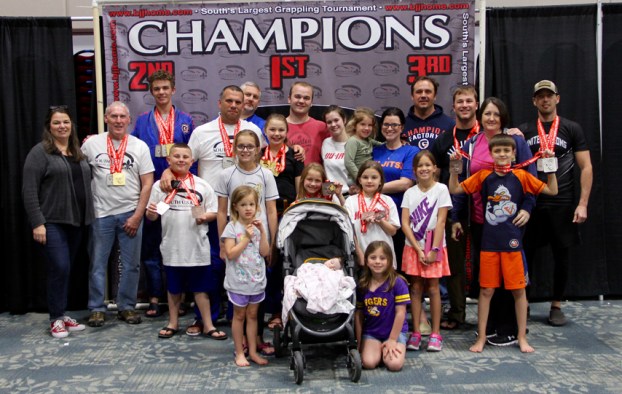 Last month, 17 Gracie United Team Jacao students competed in the Alabama State Championship, bringing home seven gold, 15 silver and 13 bronze medals. Eight students have signed up for the next big tournament, the first international competition to be held on June 22 at Xavier.

LAPLCE — As the son of missionary parents who frequently moved from place to place, Titus Foote had a rough teenhood.

Foote’s dad found a way to rechannel that energy and anger.

“He said, ‘You need to get into a safe environment like martial arts where you can have an outlet,’” Foote said.

So Foote joined a local Brazilian Jiu Jitsu gym, where he learned how to grapple with his demons, but also with other people.

And Foote’s life was forever changed. He got stronger, lost weight, met his wife, Becca, found confidence and a community. Eventually became so adept that his teacher suggested he open his own gym.

Three years ago, Foote did, founding the Gracie United Team Jucao in LaPlace. There, the Footes offer a full range of classes for students of all ages to learn martial arts for sport, for self-defense, self-discipline and even some competition. They have about 30 students ranging in age from 3 to 64.

“We really are a family,” Foote said. “Kids learn self-confidence, physical fitness and Jiu Jitsu has been proven to reduce bullying. We have several people who come here who have diabetes, who have different levels of fitness. Nearly all of them have lost weight.”

Brazilian Jiu Jitsu is a form of martial arts which concentrates on grappling, or close-to-the-ground fighting, which can give a combatant better leverage against a bigger or stronger opponent. It also teaches strong self-discipline and physical fitness. Gracie United is a Jiu Jitsu school which oversees the sport and separates it from other types of martial arts.

Eight students have signed up for the next big tournament, the first international competition to be held on June 22 at Xavier.

Foote said he is thrilled with the results.

“We got at least one medal per child and some won double gold,” Foote said. “My sister, Chloe, got two. I think it goes to show that even a small little group in LaPlace, we have a lot of ability and we have a lot of potential. Tournaments are a good place for parents to see how far their child has come. Here we practice and train, but tournament is one child versus one child.”

Charles Kliebert doesn’t need a tournament to show how far his daughter, Jordyn, has come. He said the 11-year old is like a completely different person since she started three years ago, going from struggling with grades to a great student. Jiu Jitsu worked for her because she also struggles with a vision problem.

“The hands-on helped her a lot,” Kliebert said. “She started to believe in herself. She’s got straight As. She also had bad anxiety before. She’s completely different. It changed her completely.”

SPORTSMAN’S BRIEF: Apple snails are multiplying in Manchac, and researchers warn the pink eggs carry a toxin that could cause... read more