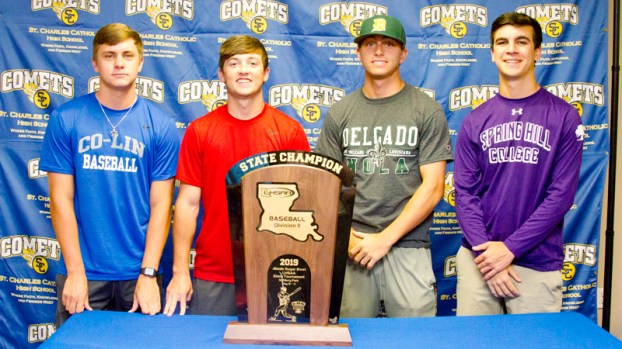 For St. Martin, it means firing every pitch with a competitive spirit at Copiah-Lincoln Community College in Mississippi.

“Once I get there, I want to prove myself and hopefully get to a four-year school. That’s the ultimate goal,” St. Martin said, adding he is open to joining any team that gives him a shot to prove his ability.

“I think I’m mentally strong. Pitching is obviously one of my strengths. I think I’m always on task during the game, and my mind is always on the right thing.”

While St. Martin has played baseball for 14 years, he patiently waited his turn on the St. Charles Catholic baseball team and emerged as a leading force his senior season, according to Coach Wayne Stein.

Stein said the sky is the limit for St. Martin, Broussard and Lorio in their future endeavors.

“I think when you come here, see these kids sign and see their teammates who are off of school come support them, it kind of shows you why we’re state champions,” Stein said. “I think it took a village. I think with all three of our guys, you’ll one day see them on a Division I roster, but they’re even better men than they are baseball players.”

Outfielder and pitcher Nick Lorio had a choice to make between Delgado and Bossier Parish Community College.

“It’s really in my backyard,” Lorio said. “It offers everything that I would possibly need, so it feels like the right fit.”

Lorio is confident that he will find starting role and become a better all-around player because of his solid foundation at St. Charles.

“I feel like St. Charles prepared me really well because they basically get all the jitters out of you in practice,” Lorio said. “Whenever it comes to the games, it’s nothing. I feel like they really do a good job of preparing kids for the big time moments.”

One of those big moments came last month when Lorio went the distance in the championship game, striking out five and allowing only 10 hits and four runs over seven innings. The performance earned him District co-MVP.

Second baseman and shortstop Peyton Broussard grew up watching Derek Jeter, hoping he could one day garner the same respect as a player.

Broussard will have his chance at Bossier Community College, where he plans to put his fielding abilities to the test as a middle infielder.

“It felt like I was in place over there when I went visit, like it was where I was meant to be,” Broussard said. “It’s a smaller community, more of a family type team. Everybody knows everybody and they play very well together. I feel like I would succeed in that community.”

Broussard, who has played baseball for 15 years, also joined the Comets football team during his time at SCC.

Whether in a game or at practice, he fueled by his desire to win.

“I like to outwork every opponent that I have and know that they’re not going to beat me on or off the field,” Broussard said.

Sutton Bourgeois played baseball and stood out at quarterback and receiver in football, but his heart has always belonged to soccer.

“You can get creative with it, unlike other sports,” Bourgeois said. “You’re on your own when you’re on the field, and it’s just you and your teammates.”

Bourgeois is heading to Springhill College in Mobile, Ala. to continue a soccer career that started when he was only 4. He’s played nearly every position but mostly focuses on defender, where his speed and decision-making serve as strengths.

“I’ve always known Springhill as a good, Catholic, small college that I could go to,” Bourgeois said, adding Mobile is similar to New Orleans in culture.

PINEVILLE — Louisiana College softball continued its excellence in the classroom during the 2018-19 academic year with 20 players earning... read more