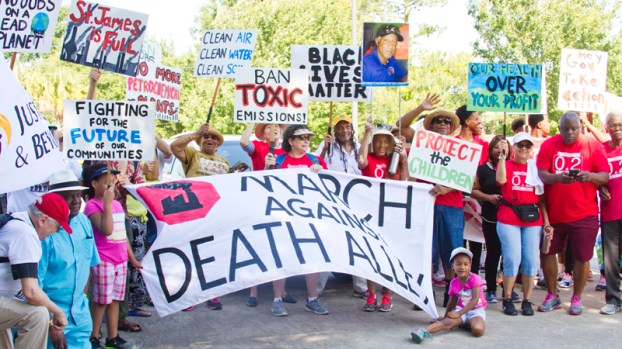 Concerned Citizens of St. John are among those marching toward the Louisiana state capitol this weekend to fight for air quality.

RESERVE — A busload of protestors from the River Parishes and beyond gathered at Fifth Ward Elementary Thursday morning, bearing signs that read, “protect the children,” “ban toxic emissions” and “our health over your profit.”

Concerned Citizens of St. John are among those marching toward the Louisiana state capitol this weekend to fight for air quality.

Fifth Ward was an important starting location due to its proximity to Denka Performance Elastomer (DPE), a petrochemical plant that came under fire in recent years for its chloroprene emissions.

Labeled as a likely carcinogen by a 2015 report from the U.S. Environmental Protection Agency’s National Air Toxics Assessment, chloroprene has been linked to heightened cancer risk in animal studies.

Jim Harris, spokesperson for Denka, said the company “quickly and voluntarily” developed a plan to reduce emissions after taking ownership of the LaPlace facility in late 2015.

Denka installed more than $35 million worth of equipment to meet an 85 percent reduction goal as part of an administrative order on consent (AOC) with the Louisiana Department of Environmental Quality (LDEQ).

In a May 16 letter addressed to Denka plant manager Jorge Lavastida, LDEQ indicated the 2019 data did not represent an 85 percent in chloroprene emissions reduction when compared to 2014 statistics collected when DuPont operated the LaPlace plant.

LDEQ gave Denka 30 days, or until June 15, to verify emissions have truly been reduced by 85 percent, according to public relations director Gregory Langley.

“It’s not like we’re going down there to carry out some penalty on them if they don’t meet it within 30 days,” Langley said. “It would just mean we would go back and reexamine some of the information. The problem was that it wasn’t a full year (of reporting). When they started up, they had some issues with freezes, and they had a shakedown period, so they only had a partial year of reporting.”

Langley said the additional data expected in June will allow LDEQ to “compare apples to apples” with 2014 data to give a more complete assessment of reduction.

“Because of the startup period, DPE’s annual emissions report for 2018, January-December, does not reflect the full impact that the company has currently achieved,” Harris said.

He said Denka intends to provide the follow-up report requested by LDEQ.

“There are no regulatory standards or action or evidence of health impacts that forced DPE to reduce its emissions – it has and continues to operate within permits issued by LDEQ,” Harris said.

Community safety is a top priority, Harris said, adding the company will continue to ensure it is a responsible operator and a good neighbor.

“Throughout this entire period, DPE has continued to work closely with the U.S. Environmental Protection Agency and LDEQ and meet with its near neighbors and local officials to hear their concerns,” Harris said.

For Robert Taylor, leader of Concerned Citizens of St. John, those efforts have never been enough. He referred to the reduction plan between LDEQ and Denka as “a joke and a diversionary tactic” on the part of both parties.

“From the beginning, there never was a penalty placed on that AOC deal,” Taylor said. “There has never been anything in place to really enforce that. It gives the impression to the people here suffering from this that it was never a real effort.”

Taylor said the new equipment and reductions, if they meet 85 percent, do little to protect the public from air quality concerns.

“Denka bragged they spent all this money, but the results are zero in my opinion because the EPA said that anything more than 0.2 (micrograms per cubic meter) is unacceptable,” Taylor said, noting recorded air concentrations have far exceeded that amount. “It’s not livable conditions for human beings.”

Taylor and other protestors are marching with the following demands: (1) add no new petrochemical plants to the River Parishes, (2) ban industrial emissions within five miles of public areas, (3) curb chloroprene emissions to under 0.2 ug/m3 or shut Denka down, (4) shut Mosaic down and remove public waste material, (5) cover all health care costs incurred by residents for illnesses caused or exacerbated by exposure to industrial pollution and (6) end the industrial tax exemption program.