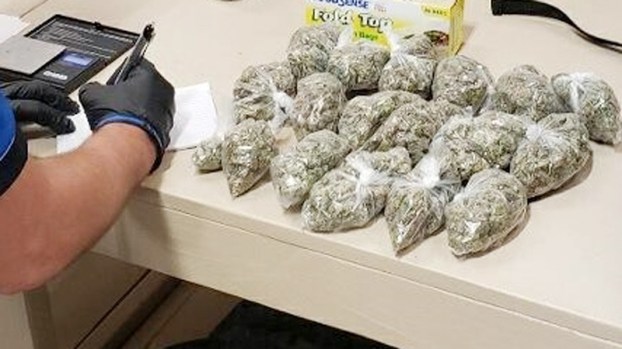 Officers located a backpack with 17 bags of marijuana — 16 bags contained 29 grams each, and one bag contained 19 grams - a digital scale and a box of clear plastic bags.

LAPLACE — A local man is behind bars, charged with terrorizing, illegal weapons possession and drug possession.

Romalis J. Williams, 40, of LaPlace was officially arrested Monday; however, police said their case began the day before after St. John Sheriff’s Office deputies responded to the 600 block of West Airline Highway in LaPlace at 8:45 p.m. Sunday following a loitering complaint.

According to authorities, while officers were dispersing individuals they smelled a strong odor of marijuana coming from several vehicles in the parking lot.

Deputies then observed a plastic bag of marijuana and a rifle on the driver’s side floorboard of a parked vehicle.

At the same time, St. John Sheriff’s Communications reported a suspicious call in which a male threatened officers for conducting crowd control at the business.

Officers proceeded to close the business, the name of which has not been initially released, and continued to disperse subjects from the premises.

Shortly after, a search warrant was executed on the vehicle.

Inside the vehicle, officers discovered three pistols and a plastic bag with 3.5 grams of marijuana.

Police said the pictured guns were seized during their investigation.

Searching the vehicle’s trunk, officers located a backpack with 17 bags of marijuana — 16 bags contained 29 grams each, and one bag contained 19 grams – a digital scale and a box of clear plastic bags.

Through investigation, detectives developed Williams, a convicted felon, as a suspect in the suspicious call. Officers made contact with Williams a short time later at his residence.

Officers also observed a jar containing marijuana on the floor of a bedroom and a rifle lying on the floor.

The investigation of the vehicle is ongoing, and police have not identified who they believed owns or operates it.