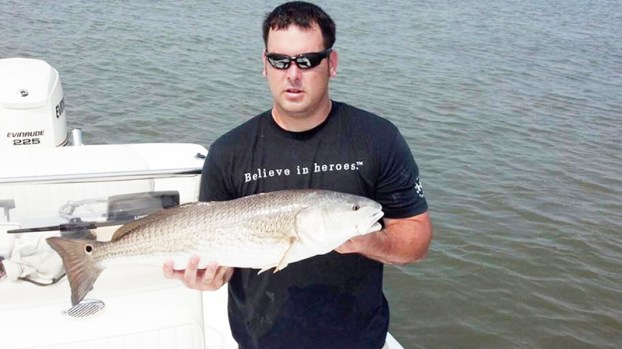 COCODRIE — Fishing poles and summer fun have raised approximately $90,000 for fallen and injured officers throughout Louisiana since 2014, according to Edie Triche of LaPlace.

Officers and supporters gather annually for the Spots and Dots Fishing Tournament in memory of fallen St. John the Baptist Parish Deputy Jeremy Triche, killed in the line of duty in August 2012.

One year after her son’s death, Edie started the Deputy Jeremy Triche Fallen Hero Foundation. When Spots and Dots was organized one year later, one of Jeremy’s favorite hobbies became a catalyst to continue his legacy of helping others.

The fifth annual Spots and Dots Fishing Tournament will be held June 8 at the Harbor Light Marina Pavilion in Cocodrie, beginning with the first beams of early morning light.

A $50 ticket, discounted for police, military and first responders, raises money for officers and their families in need.

“Every time we get to go out and hand these people a donation, it’s just a wonderful feeling for our family,” Edie said. “They are very, very appreciative. It’s hard when you have to face difficulties in this kind of work, and it just brings us great joy that we can do that for these people. Jeremy was a person who always liked to help someone, so we’re following his dream with the foundation.”

Jeremy also loved his family fishing camp in Cocodrie, where he spent countless days relaxing by the water.

Edie said Spots and Dots is equally relaxing, whether participants enter fishing divisions or prefer to watch while enjoying food, music and raffles.

There are first, second, third and biggest fish prizes for speckled trout and red fish divisions, as well as a children’s division open through age 11.

Unlike other fishing tournaments, Spots and Dots allows participants to keep their catches, according to board member Brian Bertrand.

“Down here in South Louisiana, everyone loves fishing, whether it’s on a boat, by the side of the road or by the lake on the shoreline, so what better way to go out an do some fishing than for a good cause?” Bertrand said. “The big thing is the funds go to help officers and first responders. We’ve helped firemen, military, paramedics for any kind of situation.”

Those circumstances have included funding paychecks for injured officers and responders until they recover and return to work, Bertrand said. In less fortunate scenarios, funds have helped families pay for final expenses.

“The thing that grabbed me the most was his passion for wanting to be in K9, and that made me want to spend more time with him,” Bertrand said. “It had been a long time since I had a co-worker as passionate about K9 as I was.”

Edie was moved to tears at last year’s Spots and Dots when an officer brought Jeremy’s retired K9 companion, Jango, to the festivities.

The 2018 event also saw a large showing of support from the Ascension Parish Sheriff’s Office, adding onto the turnout from officers in St. John, St. Charles and St. James parishes.

“This day is for them, too,” Edie said. “We do honor those that serve. We usually have about 50 officers there.”

This year, she’s expecting close to 100.

Edie said the event also pays special homage to Deputy Brandon Nielsen, who was killed in the same 2012 attack that claimed Jeremy’s life. She hopes this year’s Spots and Dots will see more participation from children.

“We welcome kids,” Edie said. “Jeremy is a person who loved kids, so our next step is to try to get these dads to bring their little boys and girls out there.”

LAPLACE — Make the most of your summer at St. Charles Catholic High School. “SCC Summer Camps are great because... read more