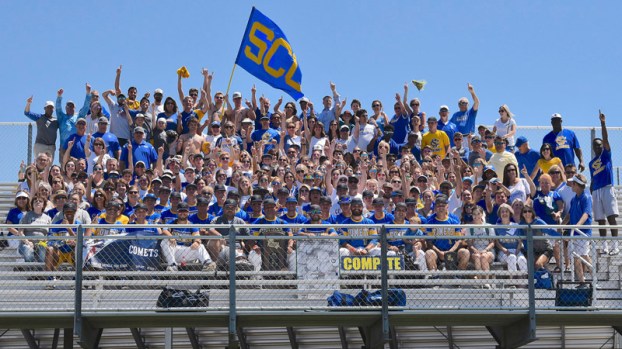 The victorious St. Charles Catholic Comets pose with family and friends in the stands after the school’s championship game win. (Photo by Kristen Gilbert)

SULPHUR — The eighth championship appearance was the charm for the St. Charles Catholic baseball team Tuesday afternoon as the No. 6 Comets upset No. 1 University High for the first LHSAA state baseball title in school history.

It was a historic moment on the Sulphur field when the game ended 7-4 among loud cheers from a joyous Comets crowd.

The long-awaited win was a crowning achievement for 11 Comets seniors who have already accomplished several playoff appearances.

Senior Nick Lorio went the distance on the mound during the championship game, holding the University High Cubs to 10 hits and four runs. Lorio struck out five while throwing 115 pitches over seven innings.

Stein said Lorio “fought and competed his butt off,” noting Lorio didn’t have his best stuff and couldn’t find one of his best pitches — his cutter.

“But, he kept just gutting it out,” Stein said. “We gave him some run support and a chance to kind of throw the ball over the plate, and we were able to make some plays behind him.”

The Comets offense broke through in the top of the third inning with runs from T.J. Lasseigne, Peyton Broussard, Kaile Levantino, Robby Gilbert, Nicholas Lemoine and Kendell Harris.

Caleb St. Martin knocked in the last score of the third inning when he doubled with a line drive to left field.

Broussard added another run in the fourth inning to bring the score to 7-0.

“Early on, we felt like the strike zone was a little wide,” Stein said. “I told the kids, make the adjustment, and we did. I think it settled us in. Maybe we relaxed a little bit having a seven-run lead, but it gave us an opportunity to challenge their hitters and make them earn every run.”

Gilbert finished the game with three hits and three RBIs.

“He’s done that for us all year,” Stein said. “He’s competed at a high level, hitting over .400. He’s the guy who when you want him to play, he performs.”

The Cubs scored again in the sixth and brought in another two runs in the bottom of the seventh.

However, that is where the runs ended as Lorio fielded his position well, throwing to first baseman Evan Roussel for the last out of the seventh inning, ending the game with a Comets victory.