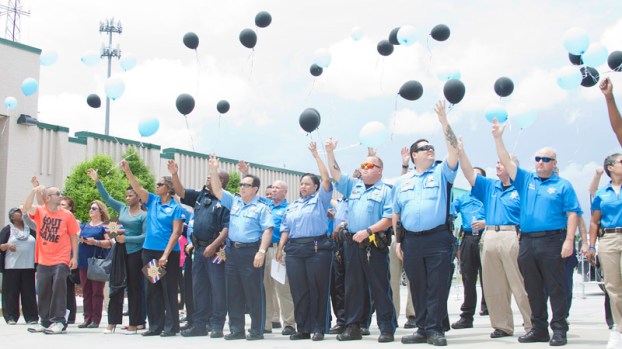 LAPLACE — Sheriff Mike Tregre envisions benches on side a marble memorial where visitors can read the engraved names of heroic St. John the Baptist Parish officers killed in the line of duty.

That vision is set to become a reality following 2019-20 construction of the Lloyd B. Johnson Law Enforcement Training Center at the site of the old bowling alley on Cambridge Drive.

The memorial will be the site of future Fallen Officer Balloon Releases, held annually to honor eight St. John Parish officers killed in the line of duty between 1936 and 2012.

A crowd of blue gathered for the most recent balloon release ceremony Wednesday afternoon outside of the Percy Hebert building in LaPlace.

Edie Triche and Daniell Nielsen Jenkins were among those holding framed photographs of lives lost, reinforcing the message that when one officer falls, the entire St. John Sheriff’s Office hurts.

Daniell Nielsen Jenkins and Edie Triche hold framed photos of Deputy Brandon Nielsen and Deputy Jeremy Triche — their loved ones shot and killed in the line of duty.

There has been no resolution for the families yet. However, Edie is hopeful the first trial can begin by the end of 2019, and she is thankful for an abundance of SJSO support.

“I try to go to as many memorials as I can just to memorialize these officers that put their lives on the line in duty each and every day,” Edie said.

“It’s hard, but I get through it. It’s something Jeremy would want me to do. It’s (a feeling of) pride to know we still have all these officers standing behind us.

“It’s a great feeling. I could call anyone on this force, and they would be there for me.”

Edie memorializes her son with an annual Spots and Dots fishing tournament in honor of all officers killed in the line of duty in Louisiana.

Tregre said law enforcement is a brotherhood united by a common goal to protect and serve, regardless of geographic location.

McKeithen was gunned down May 5 in front of the Biloxi Police Department.

“To the officers that are here today, the message has not changed one bit,” Tregre said to the crowd at Wednesday’s ceremony. “Stay safe, take care, watch your back, and watch the backs of the men and women who serve beside you every day, every night.”

The message is a powerful one for Sgt. Jason Triche, who was shot and critically injured during the 2012 attack that claimed the lives of his two fellow officers.

“It’s a huge impact,” Triche said. “It just reminds everybody how serious this job is.”

While the risk to officers is a current discussion in society, it is not a new phenomenon.

St. John Parish Constable Ignace Rousselle was shot and killed on Oct. 20, 1936 as he entered a residence to question a man about stolen farm equipment.

Deputy Harry Troxlair Sr. died in his patrol car on Aug. 1, 1969, struck by a passenger train as he responded to a domestic disturbance. He had served with SJSO for 18 years.

On Nov. 6, 1984, 32-year-old Detective Lt. Sherman Ray Walker was gunned down in an ambush in front of his home as he entered his unmarked patrol car.

During Wednesday’s ceremony, Leslie and Michelle Granier wore “309” shirts in memory of Deputy Barton Granier, a husband and father shot and killed at age 37 by a robbery suspect on Jan. 27, 1996.

Songy was struck and killed by a drunken driver on July 9, 2002, while directing traffic at an accident scene, while Gonzalez was fatally shot on June 16, 2006, during a manhunt for two suspects who had shot and wounded a deputy minutes earlier.