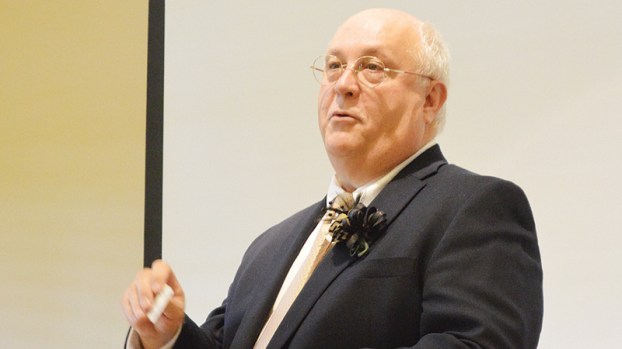 Randy De Soto speaks in 2014 during a retirement ceremony in his honor in LaPlace.

LAPLACE — Nearly five years after his retirement, Randy De Soto is returning as interim director of the St. John the Baptist Library system.

Library Board member Blaine Tatje said De Soto’s placement is a temporary solution to get the library back on track during the search for a new director.

The Library Board unanimously approved De Soto’s placement during a Tuesday meeting. He begins full time work on Monday.

“He’ll be with us no longer than six months,” Tatje said. “We have a nationwide search going on right now with the company that we hired to hire a new director. He has taken this position understanding it is just in the interim, and it’s just to help us because this is a system that he’s worked in for 30 years.”

De Soto headed the St. John Library from 1986 until his retirement in June 2014 and left the library in good financial standing.

Five directors have come through the library since then, including three in the first four months of 2019.

Library Board President Virgie Jarrow-Johnson briefly assumed an interim director role after an emergency April 22 Board meeting, where it was alleged Douglas gave herself an 11 percent pay raise without approval.

Douglas was also said to have mistakenly given some employees four percent raises when only two percent was approved.

The payroll questions came soon after former library bookkeeper Dulce Michelen’s second arrest last month for alleged theft of up to $59,000 from the library, discovered through a recent audit.

Douglas is suspended without pay until further notice, and an investigation is ongoing.

New director prospects have been identified by a hiring agency, according to Jarrow-Johnson, though the process cannot be rushed.

Tatje is hopeful De Soto’s experience can help resolve some of the library’s financial troubles in the meantime.

“My hopes are that we can get back on track internally,” Tatje said. “I do think the library has the capability to maintain a high level of customer support for our community, but I think what Mr. De Soto can bring in is 30 years of management skills.”

According to Tatje, De Soto will be compensated $75 an hour to cover expenses incurred from his months-long relocation from Shreveport, where he moved after his retirement.

Jarrow-Johnson recommended De Soto take the interim position in belief that he will be “very good for the system altogether.”

“He knows the system very well,” Jarrow-Johnson said. “Hopefully, he will be able to lend his expertise in the areas that needed to get us up and running in the way he left the library, which was in good standing.”

De Soto, who was in attendance for the Tuesday night meeting, said he will do his best to serve the library and community.

“I’m willing to help,” De Soto said. “I have 29 years of experience, and hopefully that can be a useful thing for getting the library on course.”

De Soto said library directors must have an understanding of what libraries are about and a belief in helping the people of the parish.

The Garyville and Reserve branches were added during De Soto’s tenure. He oversaw expansion of the LaPlace and Edgard branches and the addition of an administrative building for offices, computers and technical services departments.

“I’m kind of uprooting myself,” De Soto said in regard to leaving Shreveport. “This is short term. Whether it’s going to be two months, three months, four months or longer, we don’t know right now. It is important to me because I’m willing to do what I have to do to get it accomplished.”

LAPLACE — Gunshots rang out when two vehicles intersected Wednesday evening at Madewood and Concord drives in LaPlace, according to... read more