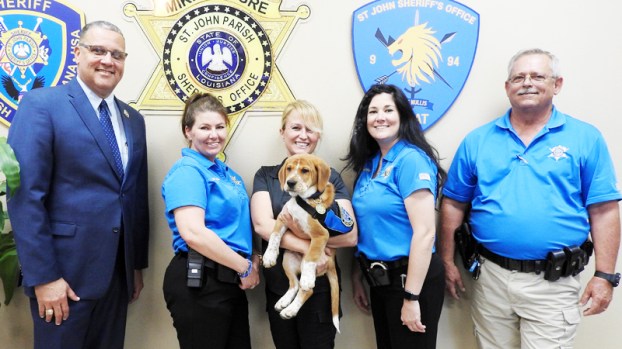 LAPLACE — The St. John Sheriff’s Office has a new officer, Finn, among the ranks, and this new addition doesn’t even require a salary — just some loving.

Finn soon will be a commissioned Trauma K9 officer.

“Many people underestimate the influence a pet can have on a person’s emotional well-being,” Sheriff Mike Tregre said. “My detectives took notice of the positive effects of trauma canines in other agencies and they suggested we have one as well.”

Finn is being trained by canine professional Severine Vicknair, who is certified with the Association of Professional Dog Trainers and a certified dog trainer-advanced with Paws with Class.

Finn will serve in a variety of situations including helping in crimes against children, domestic abuse incidents, deadly accidents, and other traumatic events.

When Finn’s training is complete, he will move in with his handler Juvenile Detective Sgt. Ann Taylor. Taylor and Finn’s goal is to bring comfort and affection to victims in traumatic situations as well as first responders who often deal with stress and anxiety in their lives.

Unlike the department’s other canines trained in narcotics detection and explosive detection, Finn is being trained to provide companionship, comfort, and stress relief in an effort to calm and relax people.

Athena was among more than 150 dogs seized in a local hoarding case.

“In the unfortunate event surrounding these dogs found in a home in our parish, we have chosen to adopt one puppy from a litter born in February of this year,” Tregre said. “The St. John Sheriff’s Office was lucky enough to have an officer whose wife is a certified trainer in these cases. I want to thank Severine Vicknair for donating her services to SJSO. Now, Finn will serve this community by bringing calm and relaxation to kids from ages 1 to 91 and live happily among his brothers in blue. I am happy to commission Finn and welcome him to SJSO.”
Vicknair, along with husband Cpl. Roy Vicknair, decided to foster Athena and her upcoming litter. Finn and his four litter mates were born to Athena on Feb. 6.

Two of Finn’s litter mates are starting their journey as Service Dog prospects, while another pup is being evaluated for another parish, following in Finn’s footsteps, Vicknair said.

In March, Lt. Christie Chauvin spoke with Severine about the SJSO adopting Finn and training him as a Trauma K-9 dog.

In preparation for his new job, Finn was tested three times in Volhard Puppy Aptitude by three different professional trainers when he was seven weeks.

“Finn’s scores estimate him to be the perfect candidate for his future purpose,” Vicknair said. “Once Sheriff Tregre learned of what an outstanding canine Finn was, he agreed to the adoption of Finn for the St. John Sheriff’s Office as a Trauma K9.”

Finn and his handlers’ training is being provided and donated by Vicknair.

Finn will be handled and cared for by Taylor and Chauvin.

HAHNVILLE — A St. Charles Parish man is going to prison for life, and prosecutors said the bravery displayed by... read more