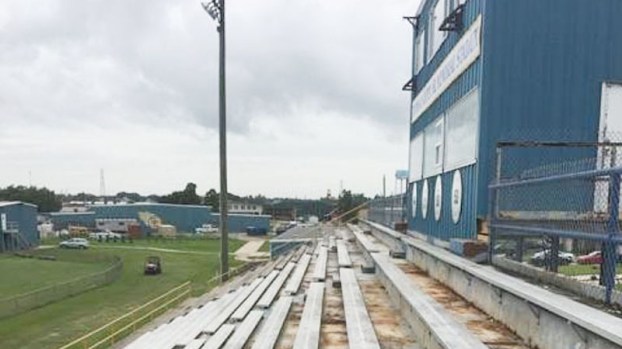 The Louisiana High School Sports Hall of Fame Committee voted to induct Monica as one of the recipients to their prestigious group of inductees.

The entire River Region community is invited to St. Charles Catholic High School Friday evening to pay tribute to Monica, a man who has devoted 50 years of dedicated service to teaching and coaching the youth in Louisiana.

With each Friday night kick off, expectations are high and everyone is a member of this team, SCC officials said. While the players are on the field, they do not do battle alone.

The student managers, cheerleaders, star steppers and drum line, together with the players, make up 50 percent of SCC’s total enrollment.

The positive impact from SCC’s storied football program has lasted for generations.

This inclusive partnership has created one of the most successful football programs in the state. The Comets have qualified for the state playoffs 17 straight years under the guidance of Monica.

The Comets were also runners-up three times and semi-finalists eight times in that span.

While winning is important, what happens on the field goes beyond the final score.

“I am motivated to teach young kids fundamentals while instilling discipline and accountability which ultimately creates one’s work ethic,” Monica said of the life lessons learned on the field. “I hope students walk away from SCC with a wholesome experience in an environment of enthusiasm.”

Monica loves to share the story of the stadium at SCC.

SCC’s current stadium is the last remaining remnants of the “upper deck” from the original Tulane/Sugar Bowl Stadium, which was the birthplace of the Saints in 1967.

After the introduction of the Super Dome in 1975, the Sugar Bowl stadium was demolished in 1979.

It was at this time that part of the Saints’ past became the future of SCC football.

A section of the “upper deck” was salvaged, barged up the Mississippi River and reassembled as the SCC home side football stands by parents and community members.

Even volunteer welders from local fabrication shops completed the reassembly process. The section relocated to SCC served the school well until now — a second lifespan of 40 years.

At its prime, the Sugar Bowl was the largest steel structured stadium in the world. The architect was none other than Tom Benson’s great uncle, Herbert Benson.

This great stadium played host to Tulane’s football program since 1926, the year before Tom Benson was born.

The first Sugar Bowl game was played in 1935. Besides being the home of the Saints, the stadium was also the site of three of the first nine Super Bowls.

The “upper deck” became famous as tens of thousands of Saints fans routinely stomped their feet on the steel decking to the point of shaking the entire stadium.

As resilient as the “upper deck” has been, the time has arrived for its second and final demolition. Unfortunately, the famed football facility is at a crossroads.

After decades of use, the steel structure has reached the end of its lifespan.

The only solution is to replace the storied bleachers. The demolition and replacement cost approximately $540,000.

Monica hopes to have a new stadium in place by Week 3 of football season in September, since the alternatives would be to scout a new venue for home games or play every game on the road.

He said the football stadium is a crucial aspect to student life as the site of homecoming games, Friday night lights and boys and girls soccer games.

“It’s a necessity that you have that if you’re going to have an athletic program, because the different things you can use your stadium for are unlimited,” Monica said. “What we’d like to have is something that’s attractive, and it’s important because athletics are the front porch of your school.”

The stadium at SCC is important to the entire River Region, school officials said.

“Imagine if every graduating class from SCC raised and donated $10,000, the new stadium would be funded,” a release from SCC says.

“We have many alumni who feel strongly about their time at SCC and the positive impact SCC has had on their lives.”

Members of the community are invited to come our from 5 to 8 p.m. Friday to SCC to “Celebrate The Old, The New, The Gold and The Blue at St. Charles Catholic High School!”

Good fellowship, good food and good fun are promised for all who attend.