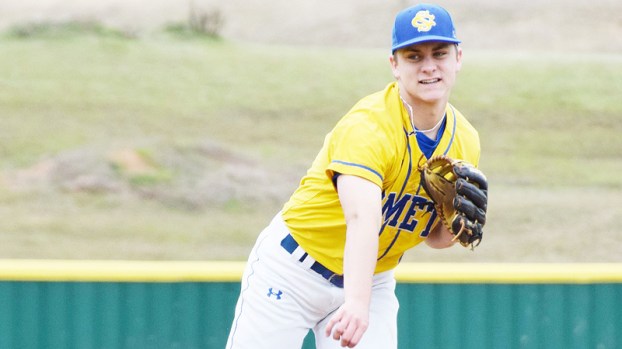 LAPLACE — Five returning starters and a few surprises set the stage for a dominant St. Charles Catholic baseball season with top performances on the pitching mound.

The Comets entered tournament play this weekend against Lutcher, South Plaquemine and Ponchatoula with a 9-3 record after earning a 12-6 victory Wednesday over H.L. Bourgeois in Lutcher.

This week’s early game was preceded by one of the best pitching games coach Wayne Stein has ever witnessed.

Senior Peyton Broussard closed the game 12-0 in the same fashion, striking out three and giving up only one hit in the last inning.

“All 18 outs of the game were strikeouts, which was rare,” Stein said. “I’ve never been part of that since I’ve been playing or coaching baseball. We’re finding some guys that can pitch.

Nick Lorio is part of an experienced Comets team that is off to a winning start in 2019.

Stein said St. Martin is a “lightning rod” player who has stepped up to pitch quality innings.

He’s joined by returning starters Robby Gilbert, Peyton Broussard, Nick Lorio, Joe Chiarella and Kaile Levatino. Stein said the five guys picked up where they left off and are continuing to improve.

“Those five have pretty much carried the weight of the team offensively, defensively and on the mound,” Stein said. “We have 11 seniors on the team, and all of them have some type of role. They’re tough kids with an extreme work ethic. They’re talented, and they do put a lot of time in hitting early in the morning and staying late.”

While there is no shortage of skill, Stein sees room for improvement in fielding. According to Stein, lapses in judgment led to losses in games against Claiborne Christian, Dunham and St. Paul’s.

“We have great pitching, but we have to make plays behind our pitchers,” Stein said. “The couple of bad innings we’ve had throughout the season have been from lack of making plays on the defensive side. We need to be able to win one-run games by playing small ball.”

Making a deep run in the playoffs is a goal well within reach, according to Stein. District play begins Tuesday with back-to-back 3 p.m. and 5 p.m. games against Lusher at the Comets’ field.

In approaching each game, Stein tells his players to focus on attitude and effort, factors they are in control of regardless of the opponent.

Stein said the Comets stand out in their respect for the baseball program.

“That’s what makes our players special.”

(Editor’s Note: This story was updated to correctly identify the pitcher who closed the Comets’ March 9 game against Chalmette.)