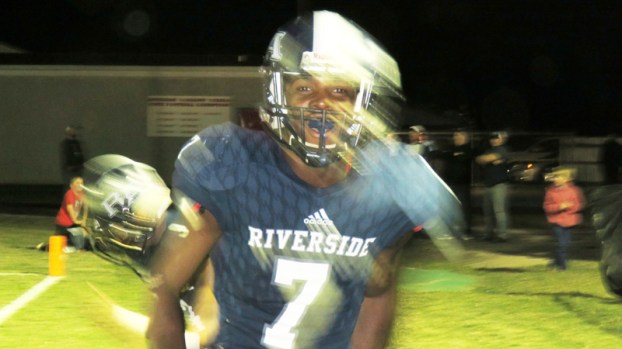 Ahmonte Watkins comes into focus on the sideline after returning an interception for a touchdown.

RESERVE — Pick a play; pick a player. It all worked for the Riverside Academy Rebels Friday night at home against North Central.

Rebels defender Nick Washington, No. 21, helps up a teammate after RA picked up a second quarter sack against the Hurricanes.

RA (3-6) topped the Hurricanes to enter the playoffs as a top 10 seed in its bracket.

When Ahmonte Watkins intercepted a pass and returned it for a touchdown with 8 minutes remaining in the second quarter, the Rebels were on cruise control, up 42-0.

RA scored on every possession of the first quarter.

First it was a Gage Larvadain 11-yard touchdown run, then an Isaiah Bigham sweep for paydirt, followed by a Larvadain scoring pass to Kash Foley and punctuated with a Louis Cheneau Jr. 34-yard power run for six points.

Less than ten minutes into the game and the Rebels were up 28-0.

The last score before Ahmonte Watkins’s defensive exclamation point was a Jaylen Watkins touchdown from 20 yards out.

The battle-tested Rebels head into playoff action next week looking for a statement win after so many close calls this regular season.

Riverside coach Kevin Dizer has consistently praised the effort of his players. Surely, there is no better breakout opportunity than Week 1 of the postseason.

The Wildcats went on the road and topped South Lafourche Friday night, 50-0.

The win improves ESJH’s record to 5-5, gives the school a solid winning streak and clinches a playoff birth in year one of coach Brandon Brown’s tenure.

Following the game, Brown said he told his players it doesn’t matter who the opponent is in the playoffs, he expects a focused week of practice.

According to Brown, the Wildcats shouldn’t have any problem getting into the one-and-done playoff mindset because they have been playing that way for the past three weeks.

Before this week’s game, East St. held the No. 30 spot in the 5A power rackings. The victory Friday certainly helps that.

VACHERIE — St. Charles Catholic and St. James High delivered a River Region classic deep into the night, going to overtime before the Comets ended up on top 13-7.

The Comets improved to 7-3 with the victory and 5-0 District champs.

SCC took momentum into overtime following a blocked St. James field goal with seconds remaining and a game-tying touchdown with 2:12 left in the fourth quarter.

That game was knotted up in regulation via a Justin Dumas scoring pass to Joseph Chiarella that covered a mere three years (just a few plays after a St. James turnover).

Dumas was the hero in overtime, as well, running 10 yards for the score on the Comets’ first offensive possession in the extra frame.

As has been the case for much of the season, SCC’s defense was amazing, holding the Wildcats to one score in the first fourth quarters and forcing a St. James four-and-out in overtime.

EDGARD — The Rams (7-2) took care of senior night and homecoming all in one, dominating St. Martin 55-0 is their first West Bank performance since Week 3.

The defending state champions, who had an open date last week, enter the playoffs on a five-game winning streak.

EDGARD — West St. John High coaches and players aren’t getting game ready this week, as the Rams have a... read more