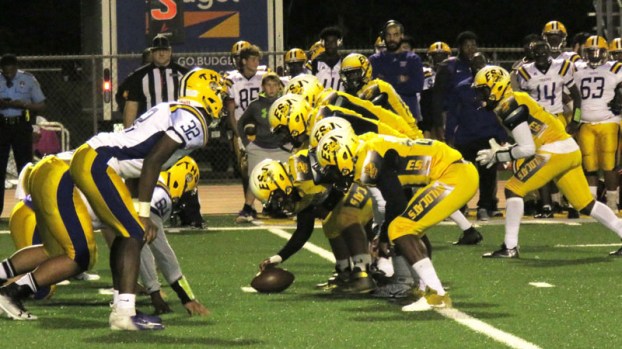 Quarterback Sean Shelby dialed them up and wide receiver Markel August answered on the other end.

The East St. John High duo connected on two long, first quarter passes — one for a 56-yard touchdown that paced the Wildcats to 21-0 lead after the first quarter.

Friday’s win sets up a regular season finale next week on the road against South Lafourche.

Following August’s 56-yard TD catch just 1 minute and 42 seconds into the game, the Wildcats defense forced a three-and-out, giving the ball right back to the ESJH offense.

Running back Pershing Toney capped drive No. 2 with a bull-dozing score following a sprint left into the north endzone.

Just over four minutes later, it was Dontae Fleming hauling in a 24-yard touchdown reception from Shelby.

In between scores two and three, Wildcats linebacker Trevion Hampton picked up a sack on fourth down near midfield, forcing a Thibodaux turnover on downs and giving the ball back to the East St. John offense with a short field.

Friday’s victory on Senior Night marked ESJH’s first at home this season. Wildcats fans would love to get another game in Reserve before the end of 2018.

NEW ORLEANS — St. Charles Catholic gave it the old college try, and it was just enough Friday as the Comets topped a determined De La Salle 14-12 at Tulane’s Yulman Stadium in New Orleans.

Senior Joseph Chiarella scored what proved to be the game-winner from 8 yards out halfway through the third quarter, putting SCC up 14-6 with approximately 17 minutes of game action remaining.

Defense was the key from there.

The Comets stopped De La Salle on a fourth-and-6 inside their 10-yardline with 11:53 left, getting the ball back for the SCC offense.

Three minutes later when the Cavaliers did cross into the endzone via a Kendall Collins Jr. touchdown, SCC’s defense was again up to the task, stopping a two-point conversion attempt and securing a 14-12 lead, a score that ended up the final as time ran to zero.

SCC helped itself early when Justin Dumas ran in a 10-yard first quarter touchdown, which was followed by a successful extra point, putting the Comets ahead 7-0, a lead they never relinquished.

St. Charles’ win improves the school’s record to 6-3, a strong notch for a team with the No. 3 power ranking in Division II.

METAIRIE — The Rebels couldn’t contain Country Day quarterback  Justin Ibieta, who rushed for 146 rushing yards and passed for another 234 in a 42-20 win for the Cajuns.

The loss dropped Riverside Academy’s record to 2-6 this season.

The game was tied 14-14 at halftime and still close after three quarters with Country Day holding only a 21-14 advantage. Unfortunately for Rebels fans, the RA defense couldn’t hold Country Day in the fourth quarter.

Riverisde was led on offense by Gage Larvadain, who completed 16 of 29 passes for 193 yards. He also rushed for 31 yards and a score.

Louis Cheneau picked up the Rebels’ other two scores on rushing touchdowns.