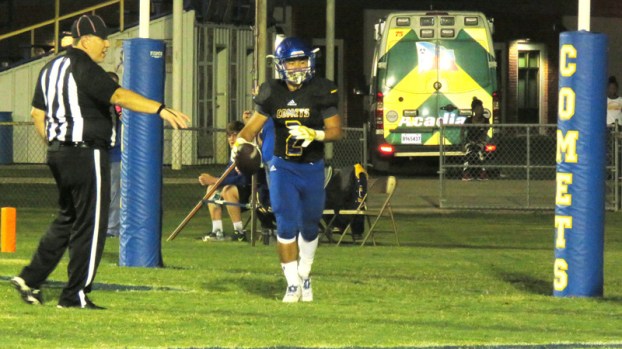 Phillip Tran, No. 2, starts to head back to the sideline after scoring a first quarter touchdown to put the Comets up 16-0 over Haynes Academy in LaPlace.

LAPLACE — The Haynes Academy Yellow Jackets (1-6) picked off a Comets pass at the SCC 10-yardline with 8:30 left in the first quarter.

It ended up being the highlight of Jackets’ ballgame.

Haynes went 3-and-out 49 second later, forcing a punt near its own endzone.

Comets sophomore Mandel Eugene would have none of it, bursting through the line, blocking the punt and nearly recovering a touchdown. SCC was up 2-0.

The Comets took the ensuing kickoff right down the field, using 1 minute, 24 seconds before sophomore Keenan Gauff ran in a touchdown to put the Comets up 9-0.

It was Phillip Tran’s turn just under four minutes later, when the junior scored from three-yards out, putting SCC up 16-0 when the first quarter ended.

The game ended 44-0, pushing the Comets’ record to 5-3 with two road games remaining in the regular season against De La Salle and St. James High.

The Rams’ five-game road trip is over.

West St. John High didn’t score a lot but it was enough for a road victory Thursday night against Varnado.

WSJH followed up last week’s 44-18 Covenant Christian victory with a 24-6 win over the Wildcats.

WSJH was led by two touchdowns from Kylan Duhe and one more from Niko Roy, while also being successful on three two-point conversion attempts.

The Rams are off next week.

The Rebels picked up win No. 2 Friday thanks to a strong showing on the road.

Riverside is 2-5 overall, 2-1 in district following the victory over winless Fisher.

RA stays on the road next week with a road date at Country Day.

DONALDSONVILLE — The Comets are over .500 again this season, following a 21-6 road win at Donaldsonville. Sitting at 4-3,... read more