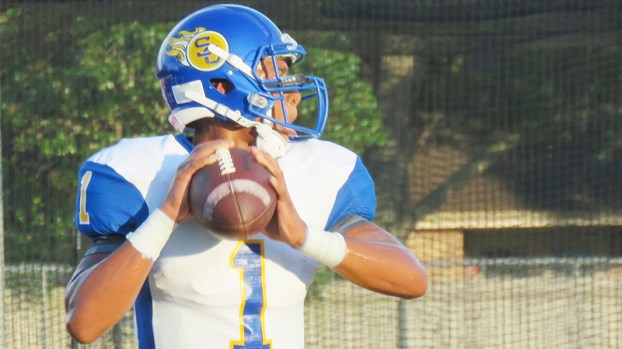 Junior Justin Dumas threw a touchdown in the second half of SCC's win Friday night.

DESTREHAN — It was a year ago that St. Charles Catholic ended Destrehan’s 39-game regular season winning streak, but Friday night’s rematch between the teams yielded a far different result.

The Wildcats rode another big rushing night from tailback John Emery, who scored three times on the night to lead his team to a 31-3 victory over the Comets at Destrehan.

While the game was close throughout the first half and St. Charles was able to limit an explosive DHS offense for a time, the Comets couldn’t get any sustained momentum offensively, and SCC coach Frank Monica said that must be corrected if his team is going to achieve its goals this season.

“I saw in our eyes we weren’t ready to play today,” Monica said. “But the biggest difference is they’re a better football team than we are right now … if they play their best and we play our best, they win because they’re the better team.”

After a scoreless first quarter that saw the Comets defense strike early on a Bryce Authement interception to halt a DHS drive, Destrehan put the game’s first points on the board on an explosive catch and run by wide receiver Quinton Torbor, who hauled in a J.R. Blood pass for a 51-yard touchdown to make it 7-0.

Destrehan (2-0) took a two-touchdown lead before halftime on Emery’s 9-yard touchdown run with just over a minute remaining in the first half.

The Comets (1-1) cashed in on a Destrehan turnover on a muffed punt, recovering deep in Wildcats territory to help set up a Cameron Fabre 36-yard field goal that made it 14-3.

But Destrehan responded with Emery’s most impressive run of the night when the Georgia commitment slashed for a 57-yard touchdown with 2:21 left in the third quarter.

A big special teams return set up another score for Destrehan when Dontrell Smith took a punt back for 42 yards. Emery punched it in from 24 yards this time to make it 28-3. Mike Ehrmann added a 32-yard field goal late to round out the scoring.

LAPLACE — St. Charles Catholic started the 2018 football season with a hard-fought 14-7 home win over the much larger... read more