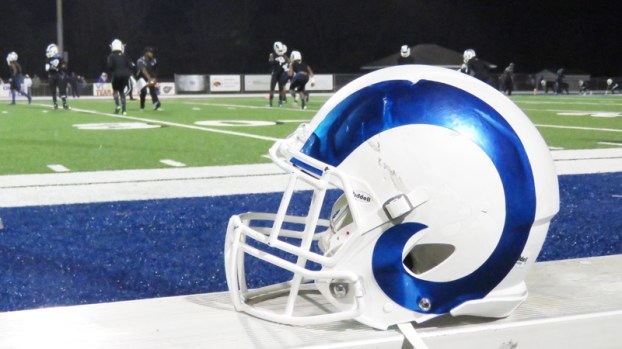 A single helmet sits on the bench while West St. John High players warm up before Friday's semifinal game against Logansport.

Hemelt: WSJH Rams have already won so much

That was how coach Brandon Walters answered my question on Monday morning about what it felt like to lead the West St. John High Rams football team to a No. 1 seed in Louisiana 1A playoffs and with it, a slate of three home postseason games.

Like any good coach — and Walters is surely a good coach — his answer hit the high notes of focusing on the task at hand.

But I’m glad he acknowledged the elephant in the room, which is that this season and what the Rams are accomplishing are special.

It is so special that it can be seen even in the middle of a state championship chase.

As we enjoy our weekend, we now know what Walters didn’t know on Monday morning and that is that the Rams are state championship bound, playing for the title at noon Thursday in the Mercedes-Benz Superdome.

It’s a tremendous accomplishment, with one life-defining opportunity still left within reach.

However, none of that changes the journey to this point. It’s not always about the destination. So much of our learning occurs on the way there.

I think about that every time I leave my Reserve home and make my way across the river for a football game in Edgard.

Although my job is to help document the action and record the final scores, those aren’t the memories that last with me as weeks, months and years past.

When it comes to West St. John High, I love walking toward the football field, where the stadium seemingly rises out nowhere, standing tall in acres of sugarcane fields.

I remember talking to principal Claude Hill before each game, knowing the conversation always includes a firm handshake.

I love the warm bowls of jambalaya served at the concession stand, an absolute must on rare cold nights. I love the DJ and the songs that I — now in my late 30s — sometimes no longer recognize even though I pretend I do.

I love running into the coach of my son’s fourth grade soccer team and finding out he is a Class of ’92 WSJH grad. (Bruce, now I know why you are so intense for youth league.)

I love overhearing Coach Walters and his staff interact with their players from my sideline vantage point.

The smiles, joy and pain of individual triumphs and failures are amazing. For two plus hours each Friday night, these teenagers lay it on the line in hopes of accomplishing what so few can — a state championship.

I think they’ve already accomplished so much. I’ve seen it. They give our community something to be proud of, something to cheer for.

And for that, I say thank you.

As the end of another year is fast approaching, we turn our thoughts to the beginning of 2018. It is... read more