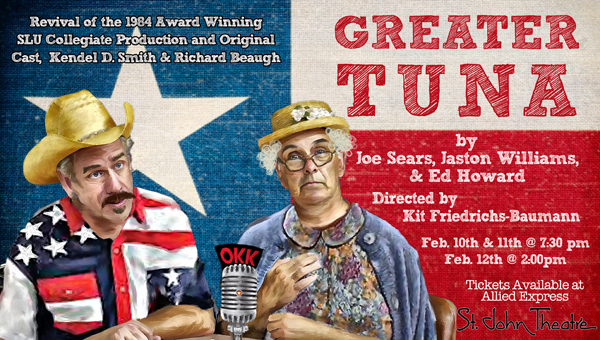 RESERVE — The best part for Kendel D. Smith is seeing audience members let their guards down and have fun.

“Honest to goodness, the fun is hearing the audience laugh,” the veteran community theater actor said. “It’s so funny. When you first go (out on stage), you see (audience members) very serious, then you see the first smile, then you hear the first chuckle and then the belly laughs start and they don’t stop. It’s fun tickling people’s funny bones.”

Smith plans on doing a lot of tickling from the stage this weekend as St. John Theatre hosts three performances of “Greater Tuna.”

The satire stars Smith and Richard Beaugh, the same duo that led a Southeastern Louisiana University production of the show in the 1980s and who performed it to a sold out crowd in Reserve in 1986.

The play asks what do Arles Struve, Thurston Wheelies, Aunt Pearl, Pete Fisk, Phineas Bye and the Rev. Spikes have in common? In this hilarious send-up of small town morals and mores, they are all among the upstanding citizens of Tuna — Texas’ third smallest town.

“The audience will recognize everybody on that stage as someone they know in their neighborhoods,” Smith said. “It’s all very funny. We literally play everybody from an 8-year-old boy to an 80-year-old woman. They are guaranteed to laugh.”

Although a 30-year-old production, Smith said the play is very timely in today’s political chaos.

“No matter which side of the political aisle you are on, there are a lot of small minded people out there,” Smith said. “Some things never go out of style, and making fun of small-minded people is kind of what the show is about, which is very current right now. You don’t have to have any political savvy to get it, but you’ll go away with a little.”

Tickets are on sale and are $12 for adults and $10 for seniors and children. Call theater managing director Crystal Faucheux at 504-676-4700 for more information.

Smith described the rehearsals as the hardest he has ever been a part of, because the action is non-stop.

“There are two of you there, and the show goes on for just about two hours, so you literally each memorize an hour of dialogue, which is not an easy job,” he said. “It’s a roller coaster ride but a lot of fun. Quite frankly, Richie (Beaugh) and I were not quite sure we could keep the pace, but we’ve done well with it.”