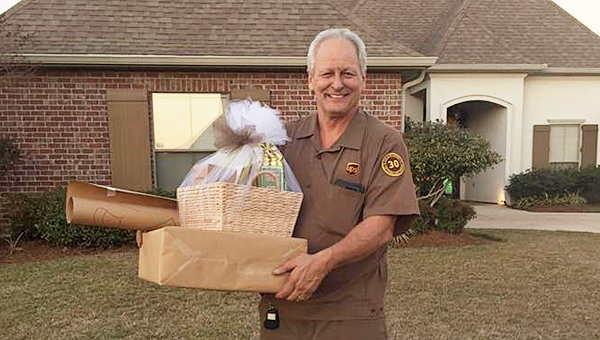 There are times somebody else says it better. When lifelong LaPlace resident Paige Galiano speaks about Dave Dantin, it’s best to let her words explain why he is someone special to St. John the Baptist Parish and the rest of the River Region.

“Whenever I was in a conversation and anybody mentioned Dave’s name, the instant response was positive from everybody,” Paige said. “I always had that in the back of my mind — Dave is awesome. He has made so many friends here, and this isn’t his home. He lives in Bogalusa. He just opened up his heart to our whole community. He has been through the births of children, the deaths of parents and has been a great friend to so many people around here. Dave is the kind of guy everyone should try to strive to live his or her life like. That’s how God wants us to live. He is just that courteous. He goes above and beyond.”

If you didn’t know otherwise, after an endorsement like that, it might be presumed Dave is a first responder, teacher or religious pastor. Good guesses, but they would be wrong.

I didn’t know better before this week, but Dave is a delivery man. His last day on the job for UPS was Tuesday and his last day serving customers in St. John the Baptist Parish was Monday.

Those customers, more thought of as family by Dave, made Monday a day the 59-year-old will never forget.

As with many things these days, it started with a call on social media.

Paige Galiano knew it was Dave’s last day and also knew many in the community would want to say goodbye. After a Facebook post and numerous shares, #daveslastday became a rallying cry across St. John Parish.

Signs were made, pictures were taken, gifts were purchased and the man who spent a career delivering to others received more than he could have imagined.

“I have to say from day one when I’ve been in St. John Parish, that Parish really opened its arms to me. I felt at home. The people were just wide open and welcomed me.”

Dave said his effort on the job was rooted in family, not customers.

“Just about anybody who needed me by phone had my phone number,” he said. “I was very accessible. Sometimes it was a blessing and sometimes it was not, especially when it was your day off or you were on vacation.

“I would get customers calling, asking, ‘where are you at? I need my package.’ Because of my nature, I would shut everything down, call whoever I could call who was on the route, call them back, direct them there and still try to give service.”

That consistent service over more than two decades created bonds that led to true friendships.

As Dave talked about his final day in St. John, he recounted by first and last names dozens of customers, often attaching a “Ms.” or “Mr.” as signs of respect.

More than once during our conversation, he took a moment to pause as his emotions got the best of him. It was easy to hear the love in his voice.

That love led to one great, final ride.

“I’ve been with United Parcel Service for 33 years,” he said. “It was just time to come home, date my wife and spend time with my family. My knees are shot from the job. It’s a struggle. The Good Lord has taken care of me, and I’m sure he is going to carry me through all of this.”

Stephen Hemelt is publisher and editor of L’OBSERVATEUR. He can be reached at 985-652-9545  or stephen.hemelt@lobservateur.com.

I was shockingly informed on Monday (Jan. 30) that Mrs. Nancy Irle passed away in Friendswood, Texas. Mrs. Irle was... read more