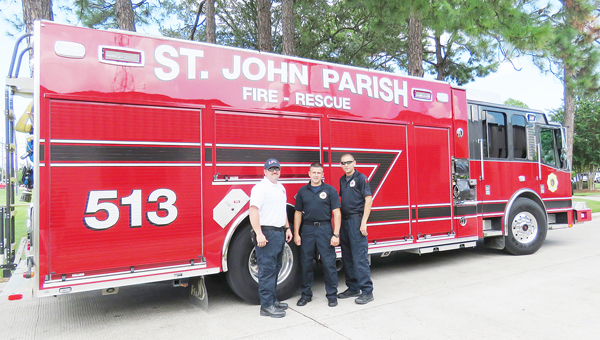 Spencer Chauvin was part of a group of St. John the Baptist Parish firefighters who hosted a L’OBSERVATEUR reporter this month during a tour of Fire Station No. 51, which is under construction on Hemlock Street in LaPlace.

The 10,500 square foot, $2.9 million structure should be the jewel in the crown of the parish’s 17 fire stations, but Chauvin had another thought that day to be excited about.

He was very proud of the department’s new Rescue Foam Truck.

He joked that crewmembers specially washed the truck in hopes of getting a picture published of it. So, in the story that published Aug. 3 in the newspaper and on lobservateur.com about a new fire station, there is a picture of Chauvin standing with firefighters Mike Philpott and Cameron Buccola in front of the fire engine.

That’s the kind of man he was, according to family members and colleagues. He believed in service and genuinely cared about his community and neighbors. That’s what makes his death Sunday, while serving in a crash response role, all the more tragic. It seems one of our region’s ultimate service members paid the ultimate price.

In the hours after his death, St. John the Baptist Parish President Natalie Robottom said Chauvin’s death marked the loss of “one of the bravest and most dedicated firefighters.”

“This type of loss will affect the entire department, and they will have our full support as they deal with the grief of losing a comrade,” Robottom said. “It is heartbreaking, especially after this same group of individuals helped to guide St. John the Baptist Parish safely through Hurricane Isaac, the February tornado and the flood event last week. Please pray for all involved and please pray for our community.”

St. John the Baptist Parish Sheriff Mike Tregre said Chauvin was so valuable that he was made a reserve officer, because “he was just that kind of guy.”

“We pledge to work closely with the Louisiana State Police as they go through the process of thoroughly investigating all potential violations of Louisiana criminal and traffic laws,” Dinvaut said.

The saga of the bus driver, his status as an illegal alien with a litany of traffic violations, the bus owner and the entity behind the bus and its occupants will grab regional and national headlines as the days and weeks pass.

However, in the River Parishes, the loss of Spencer Chauvin, a father and husband struck down in the prime of his life, will remain most important. Chauvin came from a family of firefighters and knew the risks the profession brought, but he worked anyway, making our community a better place for each day of his service. He will be remembered. He will be missed.