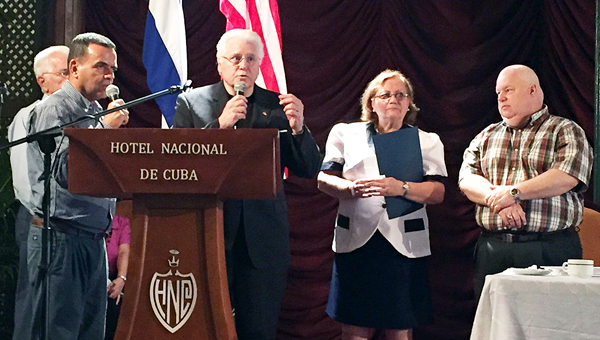 In mid-July, the Port of South Louisiana was part of a 94-member trade mission to Cuba led by Louisiana Commissioner of Agriculture Mike Strain.

The trade mission delegation was comprised of representatives from Louisiana export facilities, rice growers, shipping businesses and bankers, plus members of the State of Louisiana Legislature and Louisiana Economic Development.

During the weeklong visit, trade mission delegates toured the new Port of Mariel, located on the western part of Cuba. This state-of-the art container port began operations a year-and-a-half ago and it is equipped with top-of-the line computers, equipment, and technology.

Port of Mariel officials offered their expertise and assistance to the Port of South Louisiana when it moves forward with establishing a container facility within its jurisdiction. They also met with Cuban government and trade officials in an effort to find opportunities to export agricultural products and other commodities to the island nation, which presently imports from the Far East.

I believe it is in our mutual interest to establish an alliance of cooperation so we can facilitate international trade by promoting the all-water route through the Port of South Louisiana and the ports of Cuba. In October, we intend to sign a memorandum of understanding with the National Port Administration of Cuba (NPAC) so we can interchange ideas, knowledge, data with each other with the aim of promoting commerce and growth in our respective nations.

Doing business with Louisiana and its ports would be logistically and financially beneficial for both the United States and Cuba. According to Strain, if Cuba becomes Louisiana’s trading partner, we can expect up to $300 to $400 million in trade within just a few years.

U.S. sanctions were first imposed on Cuba in 1960 after the latter nationalized American-owned companies (without remuneration) in response to President Eisenhower’s decision to cancel sugar imports from and oil exports to Cuba.

Two years later, bans were fully expanded to economic and financial injunctions and restrictions on travel and commerce. Earlier this year, 56 years after they were established, two Cuban embargo restrictions were relaxed by the Obama administration: travel and bank transactions.

Proponents of the embargo argue that the Cuban region has not met our country’s conditions for lifting the embargo.

Opponents contend, however, that the embargo has harmed the U.S. economy and the citizens of Cuba rather than its intended target of the Cuban communist government.

According to the U.S. Chamber of Commerce, the trade embargo has cost the United States $1.2 billion annually in lost sales of exports or, as presented by the Cuba Policy Foundation, as much as $4.84 billion in agricultural exports. A study by Texas A&M University predicts that as many as 6,000 jobs would be created with the lift of the embargo.

Louisiana is an advocate for free trade with Cuba and, collectively, it’s doing everything it can to support the trade embargo lift. In February 2016, Louisiana leaders launched Engage Cuba Louisiana State Council, an alliance of businesses and organizations working in concert to lobby Congress and expedite businesses relations between the two nations.

Three Louisiana ports, including the Port of South Louisiana, are members of the state’s chapter of the national Engage Cuba coalition.

That Louisiana ports have a voice in this matter is necessary, as Louisiana is home to five of the top 15 ports in the nation, which support one in five jobs in the state.

Lifting the “blockade” could allow Louisiana’s agricultural and trade businesses to reach new buyers in Cuba, a country that imports 80 percent of its food.

It would make perfect sense for Louisiana to expand commerce with one of its closest neighbors and historic trading partners, a relationship that was thriving prior to the trade embargo (as most of Louisiana’s rice was exported to Cuba).

The State of Louisiana, its ports and the nation’s farmers have much to gain from the lifting of the trade embargo.