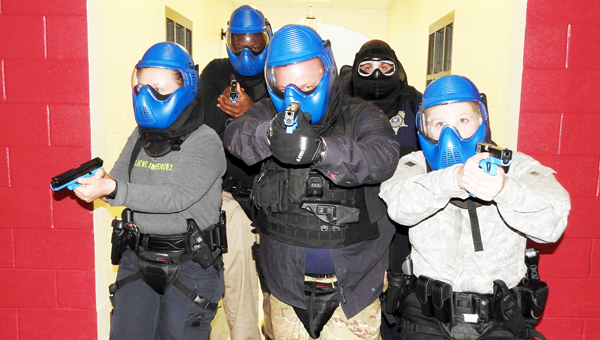 It’s morning in St. John the Baptist Parish — do you know your location’s active shooter plan?

You better, because the days of unlocked doors and visitors who are unaccounted for have come to an end.

So it was this week that L’OBSERVATEUR received photographs and a release from the St. John the Baptist Parish Sheriff’s Office detailing an active shooting scenario conducted recently at LaPlace Elementary School.

The sad part is it made total sense to train for an active shooter situation in a local elementary school. That thought didn’t even give me pause.

The pictures painted a rather ominous scene of five officers armed with powerful firearms walking through the local elementary school training for the unthinkable. Only now, it’s so much more plausible.

There was a time when a story like the one that unfolded in 1999 at Columbine High School in Colorado, which saw the deaths of 12 students and one teacher by the hands of two of their own classmates, captured our nation’s attention for months.

Today, it seems another tragedy would take its place in a week, if not days.

These violent episodes can occur anywhere, and two examples over the course of 11 hours and a mere three miles apart in LaPlace illustrate such.

Approximately 200 local residents attended a high school graduation party July 23 at the VFW Hall in LaPlace. St. John the Baptist Parish Sheriff’s Office investigators said an argument developed during the Saturday night celebration that led to violent gunplay and resulted in three young women, one only 15 years old, being shot.

It’s only by the grace of God or pure luck that someone or many someones weren’t killed.

This was a graduation party. It turned into a shootout. Somehow, it doesn’t seem shocking anymore.

The next morning in an unrelated incident, the congregation at Ascension of Our Lord Catholic Church was shocked during mid-service with the scene of a naked man walking down the center aisle of church.

The man, who Father Walter Austin said has a history of unstable behavior, was escorted out the service. Thankfully, that was the extent of the commotion.

Because of incidents like this naked intruder and far more dangerous scenes that have occurred recently, the Archdiocese is working on upgraded security in churches.

“About the only other thing we can do is lock the doors and give people passcodes to get in,” Austin said. “We certainly don’t want to do that.”

That’s the problem because not every home, business, park and gathering spot can be turned into Fort Knox.

Caution is the new norm.

Because of the many tragic shooting attacks nationwide, St. John Sheriff Mike Tregre is requiring his officers train to improve their skills preventing and responding to active shooter incidents.

The worst tragedies of our nation have come to our front stoop. So I ask again, do you know your location’s active shooter plan?