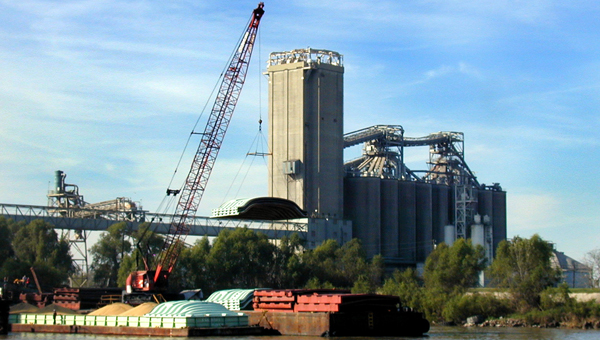 A grain elevator and barge are seen in action at ADM in Reserve. In 2015, more than 52 million short tons of grain was shipped from the Midwest to the seven grain elevators in the River Region.

From the wide variety of crops grown in the United States, three remain staples: soybean, corn and wheat. The United States grows approximately 55 percent of soybean produced around the world, grown on about 75 million acres of farmland.

Of the corn consumed worldwide, the U.S. grows approximately 42 percent of it on 90 million acres. In the middle sits wheat, 50 percent of which is grown in America on 63 million acres of land.

Although most grain is harvested for human consumption, it can be used in the manufacture of products like plastics, textiles, sweeteners, conditioners, medical swabs and hydraulic fluid (elevators in the Statue of Liberty use a soybean-based hydraulic fluid).

For those who may not know it, the Port of South Louisiana, which sits in our own backyard, is the largest tonnage port in the Western Hemisphere. In 2015, over 292 million short tons of cargo was handled through the facilities located within the Port’s jurisdiction.

Most of this cargo is moved in bulk form; that is, cargo that is transported unpackaged in large quantities. Product may come in either liquid form (like crude oil) or granular form (like grain). Last year, over 52 million short tons of grain was shipped from the Midwest to the seven grain elevators residing within the River Region — three in St. Charles Parish, two in St. John the Baptist Parish and two in St. James Parish.

In turn, 47 million short tons were exported to countries like Japan, China, Colombia, the Netherlands and Egypt. It is no surprise grain is the Port’s most handled commodity, with a total of over 101 million short tons of grain throughput tonnage in 2015. The Port of South Louisiana handles approximately 50 percent of the nation’s grain exports.

Soybean, corn and wheat make up the bulk of grain tonnage throughput for the Port of South Louisiana. Soybean takes first place with over 21 million short tons received by barge from up north and 22.7 million short tons exported overseas.

With nearly 95 percent of the world’s consumers living outside the U.S., world markets offer growth opportunities for U.S. agriculture. With the most technologically advanced and productive agricultural system in the world, the U.S. possesses a significant advantage in agricultural trade.

Agricultural exports increase profitability for farmers and create economic activity across the country. According to the U.S. Department of Agriculture, agriculture exports reached $139.7 billion in 2015 and imports totaled $114 billion. These agricultural sales create a ripple effect for the economy through processing, packaging, financing, shipping and other downstream support services.

That’s where the Port of South Louisiana plays its role. Keeping it moving. Feeding the world.