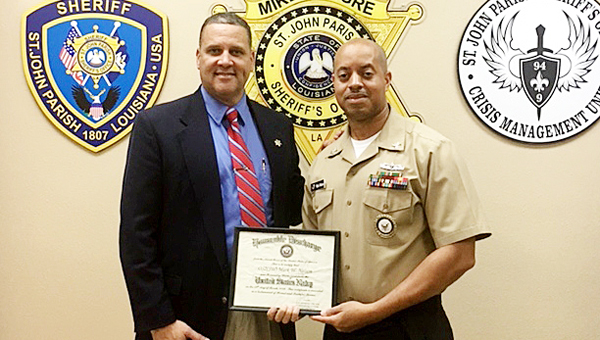 When talking about why he and his wife Petra settled in LaPlace a little more than a year ago, Mark Nelson says he likes the area’s peace and quiet.

The Nelsons live on Sandpiper Drive in Indigo Estates with their two dogs.

Like many people, they had no idea last week’s tornado was coming.

“It was a pretty scary event for my wife and I,” he told me this week. “It’s the first time we have ever been through a tornado. I wouldn’t ever want to do it again, I can tell you that.”

Nelson said he was in the kitchen with his wife when the telltale sound of a freight train and worsening weather alerted them something bad was coming.

“It kind of happened really fast, to be honest with you,” he said. “We didn’t have time to make it from one end of the house to other. That is how fast it was. We were just trying to get our pets, protect ourselves and trying to figure out what was going on.”

The National Weather Service confirmed what happened, stating a significant tornado caused damage along a 4.5 mile long and 200-yard wide path that traveled on a west-to-east diagonal path from New Wine Christian Fellowship on Airline Highway toward the junction of I-10 and I-55.

It peaked in strength near the Indigo Lakes Subdivision with winds of 130 to 135 mph, causing damage to more than 300 homes.

Nelson’s house was one of the unlucky ones.

Considering the complete loss many of his neighbors suffered; however, Nelson said he feels spared from the worst of what occurred.

Some of his windows were shattered, the front of the home was damaged, the whole back yard was ransacked and a shed was wiped out. There is also significant water damage inside the house.

Included in the damage was the loss of his storage unit, which was blown away and included important paperwork.

Nelson works as a recruiter and serves the U.S. as a Petty Officer Second Class in the United States Navy. When he chose to reenlist, he first had to be honorably discharged and he lost the certificate from 2009 indicating such. Luckily, an unknown neighbor found it.

“Of all the pieces of debris blowing in the wind after the tornado passed through last Tuesday, this one particular piece stood out,” Sheriff Mike Tregre said, adding the certificate was brought to him by a family cleaning up their own yard who trusted the St. John the Baptist Parish Sheriff’s Office would get it back to the rightful owner.

The sheriff said the information was taken to social media, and the responses to find the owner were incredible. Tregre called it an honor to present Nelson his lost certificate.

“It’s a great feeling and should give us all hope that people dealing with their own crisis still felt compassion to help others,” Tregre said. “We come together in crisis but we have to remain unified when things are not bad.”

Nelson said he really appreciated the gesture because it was so unexpected.

“Anybody would be happy to retrieve their military paperwork,” he said. “They framed it for me. That was really nice. It was really exciting for me, because I never experienced that before.”

Nelson said he and his wife are committed to staying in LaPlace, adding home renovations have already begun.

As for the framed certificate, it’s hanging on the wall over Nelson’s fireplace.

Stephen Hemelt is publisher and editor of L’OBSERVATEUR. He can be reached at 985-652-9545
or stephen.hemelt@lobservateur.com.