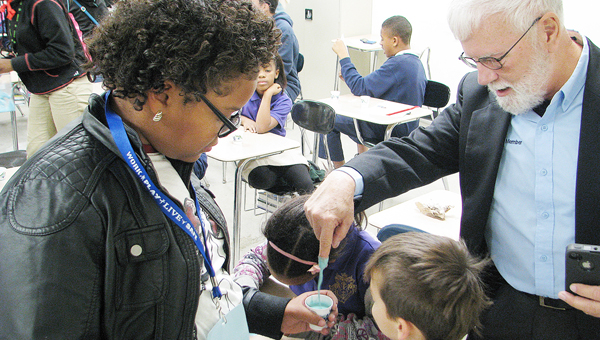 RESERVE — A group of teachers from St. John the Baptist Parish Public Schools are teaching STEM education through a more hands-on classroom approach.

Darville took what she learned during those workshops and brought that information back to her classroom.

“One of the courses we did in the workshop was integrating math into science curriculum,” Darville said. “We were given a series of tasks where we had to do some calculations, some math concepts and actually apply science concepts with it.”

While taking the workshops Darville met other teachers from St. John the Baptist Parish.

“When we came back to our schools and started doing these little tasks with our students, we found they actually liked doing the hands-on projects,” Darville said. “They actually liked talking about the concepts in conjunction with actually doing something, so it made more sense to them while they were doing it.”

The group of teachers didn’t want to just have STEM education in their individual classrooms. On Jan. 28, students from different elementary and middle schools in the School District were invited to STEM night at the East St. John High School.

The guest speaker was Alsie Dunbar from Ascension Parish, who works at one of the chemical plants.

“(Dunbar) also has her own STEM non-profit where she mentors young girls in STEM activities and gets them more interested in STEM-related careers,” Darville said.

Darville said the students took what they learned in their classrooms and showed it to their parents and members of the community.

“I believe John L. Ory did chemical experiments, where they were mixing different household chemicals to see the chemical reactions,” Darville said. “Emily C. Watkins actually used Borax to make polymers. All the activities were generated by the students, led by the students and they were teaching the community what they had learned in their classes and showed them how we can use those things to solve everyday issues.”

Nadine Stewart, a science teacher at Emily C. Watkins Elementary School, was one the teachers who took the STEM classes over the summer, used what she learned in her own classroom and also participated in STEM night.

Stewart said she pushed STEM more in the classroom this year because she taught English language arts in 2014-15. Stewart wanted to expose her students to more STEM careers, adding even thought they live in the River Parishes, her students don’t know much about the local chemical plants or the possible career options.

“I think my students are responding well to the STEM education,” she said.

“They had a great time at STEM night. They didn’t expect to have as much fun as they did.”

Stewart said students want to be involved in those hands-on things and faculty members were able to give them a lot of that at STEM night.

“My favorite part about STEM education is having the kids involved with the hands-on things, seeing the world is bigger than they think and they can expand their horizons,” Stewart said.