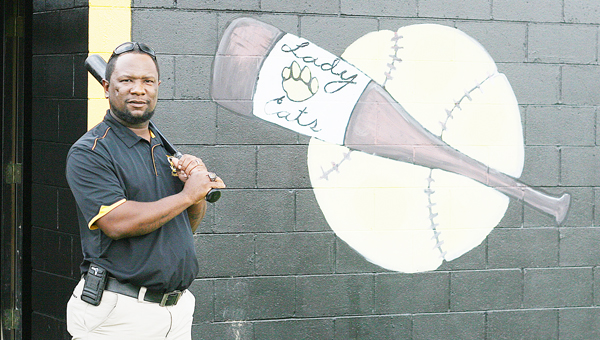 LAPLACE — With softball practices starting back up this year, assistant coach Chad Smith Sr. remembers how different last season was.

Chalyn Smith said she was shocked when she found out her father and coach, Chad Smith, was
diagnosed with kidney cancer but continued to pushed through and lead the team.

Last year, the then head softball coach at East St. John High School was battling cancer, but he didn’t let it stop him from being there for his team.

In June 2014 Smith was diagnosed with kidney cancer.

“I felt more or less worried for my family,” Smith said. “I couldn’t imagine their lives going on without me. It was very emotional, but in the same sense, at the end of the day God has a purpose for everyone’s life.

“Whatever obstacles he puts in front of you, you just have to keep living. That’s the mindset that I had.”

Smith said he took the softball program last season and basically built it from the ground up. He was able to fight cancer and coach his team, which included his daughter Chalyn Smith.

“It was emotional for me to have to coach my daughter and for her to see me dealing with everything I had to deal with,” he said.

Chalyn, a junior at East St. John, said it was “shocking” because she never expected somebody so close to her to get so sick.

At the end of the day; though, Chalyn is proud her father pushed through.

When you spend time practicing, traveling and competing as a team, everyone becomes close, according to Smith, who said the girls were almost in a state of disbelief when he told them about his diagnoses.

“I think a lot of the girls look up to me as a father figure and a mentor,” he said. “I try and treat all of them the same. I want them to be strong, independent young ladies and stand on their own two feet. That was my message to them: Keep their heads up, not lose their cool, keep their composure and not give up.”

Smith said cancer made him stronger. The coach wanted to push the girls and make them fight harder and never give up. That is exactly what the girls did as they won their first district softball game in many years.

“It felt awesome,” he said. “Just to see the looks on the girls’ faces after they got their victory was priceless. We’re playing in one of the toughest districts in Louisiana in 5A. It was kind of a confidence builder for them.”

Smith said the girls not knowing if each day would be his last day coaching them made them play hard.

As part of his treatment, Smith underwent two surgeries to remove the cancer. Thanks to those surgeries, he said his cancer is in remission.

“The team was relieved when I told them,” he said. “They realized it wasn’t as bad as they thought it would be. I have strong faith and I know the man upstairs put me in the position that I’m at right now.”

Smith still goes to the doctor every three months for blood work and every six months for scans to make sure his cancer stays in remission.

With recovery and becoming an assistant football coach at East St. John High, Smith decided to step down as head softball coach and become the assistant.

Even though he is no longer the head coach, Smith said he still wants the players to pick up where they left off by continuing to build the program and their individual skills.

Michel: True blessing comes in believing without having seen