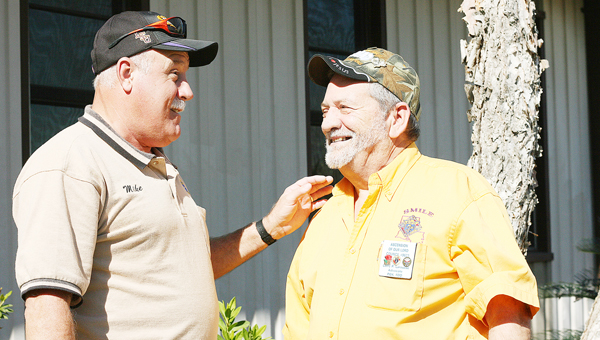 Michael Abbate, left, said the Knights of Columbus sponsors scholarships for students to attend Catholic high schools, while also contributing to education through the support of seminarians. Fellow member Larry Larousse, right, said club members try to help out however they can when contacted.

LAPLACE — The Knights of Columbus Council 9623 of LaPlace is here to help the youth, the elderly, the church community and the Parish.

Michael Abbate, left, and
Larry Larousse, right, take a break in
December to pal around with Dominic Hoffman, who local Knights of
Columbus members championed
during a recent fundraiser.

There are 121 active members who want to keep the vision of founder Father Michael J. McGivney alive. McGivney founded the Catholic men’s organization in 1882.

Grand Knight Michael Abbate, who joined almost 30 years ago, said members feed the poor in the River Parishes every Thursday.

“We deliver 95 to 100 hot meals to the poor and needy families, mostly in LaPlace and Reserve,” he said. “We meet at (Ascension of our Lord School) at 12:30 p.m., and we have people deliver hot meals at least once a week to the poor.”

Council members also feed people during Lent; however, members use that good food as a fundraiser.

“We have a fish fry every Friday and also on Ash Wednesday,” Abbate said. “That money pays for a scholarship for kids to attend Catholic high schools, and it also helps the seminarians we sponsor. We sponsor five to six seminarians throughout the year to go through their college education at a seminary.”

Community members or families in need can also be brought to the attention of the Council, which uses fundraisers to help.

In December, the Council held a jambalaya and white beans lunch and dinner fundraiser for Dominic Hoffman, an Ascension of Our Lord School student. Money was raised for Dominic, who has muscular dystrophy, to buy his own electric wheel chair and transportation van.

“So far, we were able to raise $2,200 for the wheel chair. The rest of the money will be given to the family to put on a down payment for the van,” Abbate said. “Because people heard about the fundraiser for Dominic, we also got four electric wheel chairs donated to us. One was given to him, and the others were given to the Muscular Dystrophy Foundation, so three other kids can benefit.”

Larry Larousse, a member of the Knights’ fundraising committee, said the Council is trying to help a different family in need. The Council held a fundraiser Sunday for an Ascension family having a hard time paying the bills following a recent layoff.

Charity is a big part of the Knights of Columbus.

“There could be a church member who needs help cutting his grass or needs help with his porch, we did a lot of that right after Isaac,” Larousse said.

“With the youth, we do free throw contests, coats for kids, a soccer challenge and essay contests in which students get a chance to win a $5,000 scholarship.”

Larousse said many members are proud to cook for veterans at the Southeast Louisiana War Veterans home in Reserve during Christmas. They also occasionally provide meals for ARC of St. John.

Larousse said he wants those in the community to know there is a Catholic organization of men in St. John willing to help anytime there is a need.

“Whether it be the city parish, the church parish or private individuals, if they have a need and they come to us, we will try and help,” he said. “I’m not saying that we have deep pockets, where we can give out a lot of money, but we will figure out some way to help people that need help.”