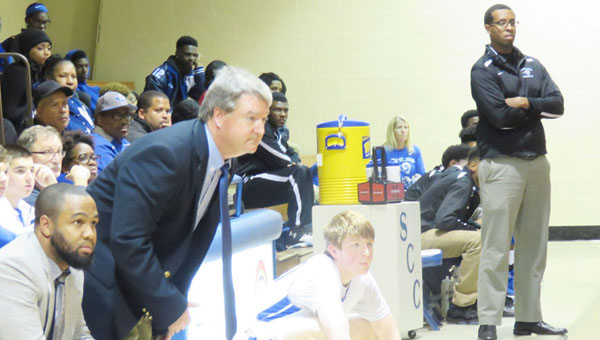 SCC coach Kemper Todd and Rams coach Alton Joseph, both standing, check out the action on the court last week.

LAPLACE — While lots of folks decided to hunker down for Friday night’s freeze, a nice crowd elected to brave the cold to see the St. Charles Catholic basketball team take on West St. John in a heated River Parishes rivalry.

It was worth the shivers.

After a tight first half, St. Charles gained control in the second half but then had to hold on for a 55-50 victory. Crucial free throws and solid defense helped the Comets hold off the Rams’ rally.

St. Charles led 47-42 lead when West St. John’s Amare Oubre scored off a steal to cut the lead to 47-44 with 2:50 remaining to play. Jordan Arceneaux answered with a jumper with 2:32 remaining to put the Comets’ lead back to 5.

Oubre tried to bring the Rams back with a pair of jumpers that cut the lead to 55-50.  After a flurry of turnovers, West St. John’s Lamore Boudoin came up with a steal but was stopped in the lane as time expired.

St. Charles Catholic coach Kemper Todd said it was a big win for his team, especially the way his players had to fight to the end.

“Yeah, it’s nice to get a district win,” Todd said. “We haven’t had a district win in several years over here. I was disappointed in the mistakes we made down the stretch. I thought we were further along. But the good news is, they fought through those mistakes and had, really, one spurt where they really attacked and scored and kind of gave us a breather.”

West St. John’s Trevon Borne led with 20 points. Oubre scored 15. They were the only two Rams to reach double figures.

Rams coach Alton Joseph said, even though his team lost, there were positives in the game.

“It was a real, real good game,” Joseph said. “It was probably the best game we’ve played all year.”

Until Thursday, Riverside Academy had a 14-game losing streak. That came to an end at the hands of Karr. On Friday, the Rebels’ losing streak was extended to two games.

The Country Day Cajuns pulled off the upset, taking a 63-56 victory over the nationally ranked Rebels in a District 12-2A game in Metairie.

Foul trouble stifled the Rebels (14-5, 2-1) throughout the game. Herb McGee picked up three fouls in the first quarter and spent much of the first half on the bench. Jared Butler led the team with 19 points. Malik Crowfield, who committed to Virginia Commonwealth University on Thursday, added 18 points.

East St. John finished its first round of District 7-5A play Tuesday with a 66-49 win against Terrebonne. That gave the Wildcats (12-9, 4-1) a bye on Friday. They begin round two this Friday at home against H.L. Bourgeois.