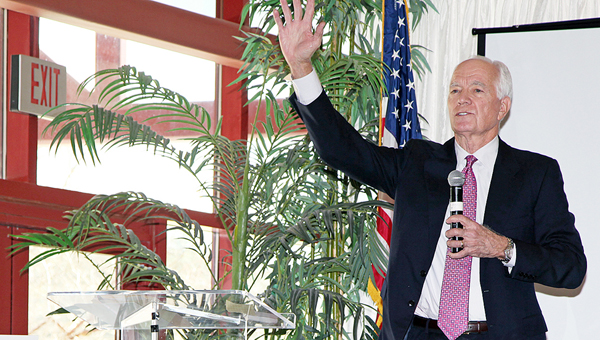 Economic consultant Dr. Loren Scott presents a study summary last week about the economic impact of the Port of South Louisiana on the River Region during the River Region Chamber of Commerce’s Annual Banquet.

LAPLACE — Economic consultant Dr. Loren Scott presented a summary of the study he conducted in 2014 on behalf of the Port of South Louisiana about the economic impact of the Port on the River Region during the River Region Chamber of Commerce Annual Banquet, which was held Jan. 13 at the St. John the Baptist Parish Community Center.

Findings of the study released in early 2015 showed port operations result in $14 billion in new business sales, $1.8 billion in household earnings, the creation of more than 30,000 jobs and an average salary of over $60,000.

The latter is 36 percent higher than the average wage in the state of Louisiana.

These numbers are sure to increase in the not-too-distant future, port leaders say, when taking into account the proposed investments that have been announced for the River Region.

Companies such as South Louisiana Methanol, Eurochem, Syngas Energy, Gavilon (Marubeni Corporation) and AM Agrigen Industries have pledged new investment; Monsanto, Zen-Noh, Valero and Entergy plan to expand their facilities, and Denka will be merging with DuPont.

Other companies that pledged their commitment to the region have, as Dr. Scott put it, “already gone vertical.”

Nucor has finished the first phase of their operation, Yuhuang Chemical and Pin Oak Terminals each broke ground in the latter part of 2015, and Entergy began its expansion at the Killona facility.

According to Dr. Scott, chemical manufacturers are large users of natural gas. Asian and European countries are large producers of chemicals.

To the good fortune of the River Region, Port leaders say, natural gas prices are at an all-time low and thus companies originating in these regions of the world are exploring opportunities to relocate their processing facilities to the parishes of St. Charles, St. John the Baptist and St. James.

During the banquet, the River Region Chamber of Commerce announced their 2016 board members, one of which is Port Executive Director Paul Aucoin.

“I am pleased to serve another year on the River Region Chamber of Commerce board,” Aucoin said.

“The River Region Chamber of Commerce plays an important role in representing businesses in the River Parishes.”