School Board asks for D.A.’s help after construction approval 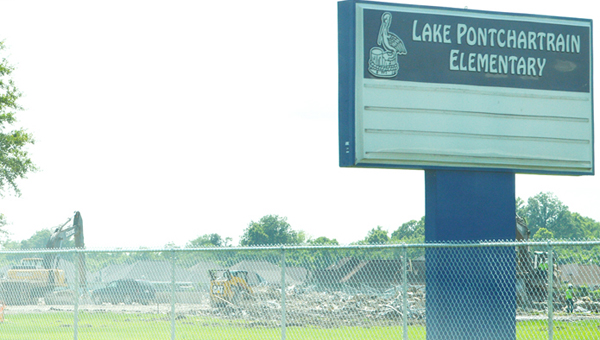 Demolition crews are seen at Lake Pontchartrain Elementary School earlier this year. School Board members approved a construction contract this week, setting the stage for a new school to be built and open in 2018.

RESERVE — St. John the Baptist Parish School Board members have asked the District Attorney’s Office to review the process by which Board members could reject the lowest bidder in a public bid or disqualify a contractor from participating in the bid process based on previous unsatisfactory performance.

The request was made in general terms Tuesday following 30 minutes of passionate discussion concerning Lincoln Builders’ role in past School District construction projects.

Board members voted Tuesday in favor of accepting Lincoln Builders’ bid of $23,295,000 to construct a new Lake Pontchartrain Elementary School and gymnasium. The approval was contested by some, including the Board’s Land and Facilities Committee Chairman, Albert Burl, who voted against it.

“The reason why I am bringing it up is if you talk to any contractor, on construction the change order average is five percent,” Burl said. “They did 16 percent (at ESJH), and it’s going to wind up being 20 percent of the total project. That is the concern I am raising with the Board.”

District 8 School Board Member Russ Wise said the School Board approved all change orders requested by Lincoln Builders. However, Wise said he appreciated Burl’s concerns and made the motion that the D.A.’s office look into the Board’s options when dealing with unsatisfactory performance by public bidders.

Williams said demolition contractors scratched the high school’s floors worse than they were and demoed on top of the floors without trying to preserve them.

“When we mobilized on site, we documented the existing conditions of the floors, brought it to the attention of the owner and they, the School Board, acknowledged it was in their best interest to do something with the floors,” Williams said.

Lincoln’s project manager Patrick Hickman said the company’s original base bid was $9,575,000 and was accepted with alternates that brought the contract to $10,009,000.

“On the project, we had $1,692,000 in change orders,” Hickman said. “Of the $1.6 million, almost $1.1 million were change orders the School Board voted to accept as enhancements to the project.”

Hickman said those enhancements included the installation of polished concrete flooring throughout the project’s buildings.

“One of the claims that was made was change orders are typically 5 percent of construction work,” Hickman said. “Out of the change orders we issued, the unforeseen conditions or things that happened, which are typical in construction projects, was $593,000, which if you take that out of $10 million is about 5 percent.”

District 1 School Board Member Russell Jack, who abstained during the Lake Pontchartrain Elementary School vote, said he has long been dissatisfied with Lincoln Builders following the company’s work on West St. John Elementary.

“When they applied for East St. John, I said that they should have been kicked out,” Jack said. “One of my concerns with Lincoln Builders at West St. John and still is today is that we asked them to do whatever they could to reach out to the community to hire some of these skilled workers in our community to put some of these dollars back into St. John. That was a concern then, and it’s a concern now.”

District 10 School Board Member Rodney B. Nicholas, who voted in favor of the Lake Pontchartrain Elementary project, said three recent construction awards to Lincoln Builders in the parish has created a logjam.

“I have nothing against Lincoln Builders, it just seems to me they have some type of monopoly on construction contracts in St. John Parish,” he said. “I would like to see, going forward, somebody else get an opportunity to work in St. John Parish, especially companies that are from St. John Parish.”

Later in the meeting, Nicholas described some of Lincoln Builders’ work as not totally responsible.

Hickman said Lincoln Builders would be cohosting a job fair in advance of the Lake Pontchartrain Elementary project, where the company’s subcontractors would try to hire parish residents for jobs including painting and plumbing.

School Board Members Gerald J. Keller (District 3) and Wise acknowledged Tuesday they were not intimately familiar with Lincoln Builders’ work or standing in the state but added if the company meets all requirements under state law for public bid, the School Board must accept the bid.

Keller also stressed negative performances by Lincoln Builders have not been logged or discussed in official capacity by School Board members.

Lake Pontchartrain Elementary, which sits on U.S. 51, has been unused by students since Hurricane Isaac struck the region in 2012. The LPE community of kindergarten through eighth grade students and staff members is located in a temporary site at the rear of East St. John Elementary.

Construction plans announced earlier this year called for the school to be rebuilt and opened in August 2017. However, St. John the Baptist Parish School Board members approved a new timeline in September that pushed the school’s opening back to Jan. 7, 2018.

Superintendent Kevin George previously said Board approval this week of a construction project allows the School District to stay on the January 2018, timeline.

Williams said Lincoln Builders has been eyeing the school construction project for sometime and is excited.

“When we knew it was coming out to bid, when we were working on the high school, we had this on our books,” he said. “We’ve been closely monitoring it. We’re excited to work with the same program, All-South. We felt they were instrumental in making the high school a success.”